The website is under construction. We apologize for any inconvenience.
Home / Books/ Non-fiction/ DICTIONARY OF JUDAISM (A-I)
BooksNon-fiction 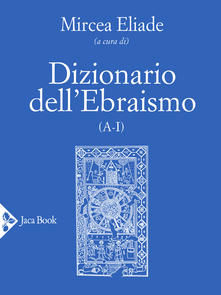 The entire multimillennial history of the religious tradition that refers to Abraham, presented in a global way in all its branches and components:

The entire multimillennial history of the religious tradition that refers to Abraham, presented in a global way in all its branches and components: ’from Adam to the present day’. An indispensable tool of knowledge to deepen all aspects of a complex and articulated religion, which has accompanied man for thousands of years in his surprising qualities as in his sometimes lacerating contradictions

No other religion has coexisted with so many different cultures as Judaism, which together with Hinduism, is the oldest of the living religions. Egyptians and Babylonians, Assyrians and Canaanites, Greeks and Romans came into contact with the Jewish religion but now their vestiges are exhibited in museums around the world. Not so for the Jewish religion, towards which Christianity and Islam are both indebted for basic concepts such as monotheism, faith in God’s action in time and history, hope in the fulfillment of the world, attention to human dignity and orientation towards a life lived in the sign of justice. The lemmas that form this Dictionary have been written by the main scholars of the subject, using documents and traditions that have settled over the millennia. In the history of religions, Judaism occupies a particularly important position, being at the same time religion, people and community of destiny which today maintains an undeniable relevance.

MIRCEA ELIADE was the scholar who contributed most to the development of the history of religions during the 1900s. Cultural attaché in London and then in Lisbon, in 1945 he was appointed professor at the École des Hautes Études in Paris. He has taught at the Sorbonne and in several European universities. From 1957 he was professor of History of Religions at the University of Chicago, where in 1985 a chair was established in his honor