The website is under construction. We apologize for any inconvenience.
Home / Books/ Non-fiction/ DICTIONARY OF RELIGIONS OF AFRICA
BooksNon-fiction

DICTIONARY OF RELIGIONS OF AFRICA 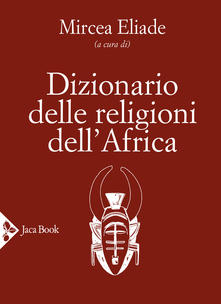 The African continent, with all its problems, its contradictions and, at times surprising positivity, is a treasure trove of history and spiritual culture to be discovered

The African continent, with all its problems, its contradictions and, at times surprising positivity, is a treasure trove of history and spiritual culture to be discovered. Traditional cults have often managed to coexist with the great monotheistic religions. Their knowledge helps us to interpret the great phenomena of humanity’s present and future.

The nature of this Dictionary is particularly composite because it reflects the peculiar events experienced by the African continent in its long evolution. We find in it all the main religious or religion-related phenomena that have developed there, cured by the best international experts. This immense territory has indeed cradled ancient civilizations such as the Egyptian one and a myriad of religious traditions that have come down to the present day, often meeting and clashing with each other and with the most widespread cults such as Christianity. Alongside monotheistic religions such as Islam, we therefore find a rich variety of African cults, linked to populations such as the Bantu, the Berbers, the Dogon, the Igbo, the Pygmies, up to the Zulu of Southern Africa. Many voices are dedicated to understanding how familiar concepts such as ’soul’, ’magic’, ’masks’ or ’hierophany’ have been interpreted in an original way in the continent from which all of us sapiens descend.

MIRCEA ELIADE was the scholar who contributed most to the development of the history of religions during the 1900s. Cultural attaché in London and then in Lisbon, in 1945 he was appointed professor at the École des Hautes Études in Paris. He has taught at the Sorbonne and in several European universities. From 1957 he was professor of History of Religions at the University of Chicago, where in 1985 a chair was established in his honor