The website is under construction. We apologize for any inconvenience.
Home / Surveys/ Translating and re-translating the classics
Surveys 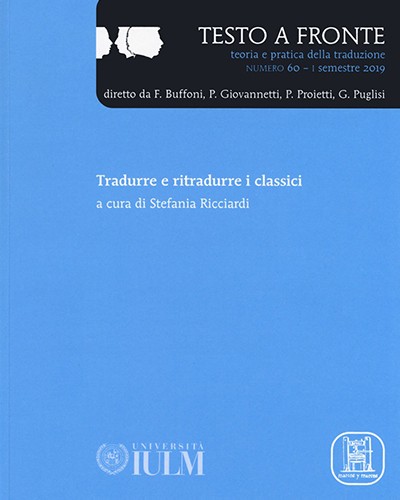 Testo a fronte a practical and theoretical journal of literary translations, founded by Franco Buffoni in 1989, celebrates its 30th anniversary with a special edition: Tradurre e ritradurre i classici , edited by Stefania Ricciardi. It has Antoine Berman’s citation «La traduction peut se passer de théorie, non de pensée» as the epigraph to the introductory pages and, as such, offers guidance to the main section of the volume, a  collection of the proceedings of the study days organized by Paolo Grossi , director of the Italian Institute in Brussels from the 7th of November 2018 up to the end of September 2019.  In first place is the current reflection on translating which scales down the scope of the theoretical approach – so often praised in academic conventions – and instead places its focus on a more direct contact with the original text and the critical interpretation that emerges as a result.

The echo that resounds from the text

The fundamental idea is that translatology, despite being «a necessary instrument and part of a translator’s cultural background», cannot substitute the human ear which is «an essential instrument for grasping the echo that resounds from the text», as once written by a scholar. This concept is widely accepted by contributing authors and translators of considerable experience – note in particular Ilide Carmignani and Franca Cavagnoli – who both illustrated key moments in their work by addressing general questions (how to translate a classic, how to rejuvenate a text) and those of a more specific nature (how to approach the text, the difficulties, the choices, the doubts).

In most cases this involved new translations of leading authors from the twentieth century, whose works were originally expressed in Spanish, English, Russian, Dutch and French. Amongst the “great classics” is Gabriel Garcia Marquez’s Cent’anni di solitudine in the version of Ilide Carmignani for Mondadori in 2017, to mark the fiftieth anniversary from when the Columbian writer was awarded the Nobel prize for this masterpiece in 1982.  The Great Gatsby by Francis Scott Fitzgerald (Feltrinelli 2011) was entrusted to Franca Cavagnoli. Fabio Pedone spoke of his own experience with Finnegan’s Wake by James Joyce, which he and Enrico Terrinoni translated and concluded in 2019 for Mondadori. It had previously been initiated with the collaboration of Luigi Schenoni in 1982; Alessandro Niero presented his version of Noi by Evgenij Zamjatin (Mondadori 2018), precursor to 1984 by Orwell, whilst Franco Paris discussed his translation of the poem Visio Tondalis by Hugo Claus (Raffaelli Publisher 2016). To close, there is the contribution of Stefania Ricciardi, who “renovated” Moneta del sogno, a novel set in Fascist Rome, written by Marguerite Yourcenar.

Translation, instructions for use

Extracts from the essays La lingua è un’orchestra. Piccola grammatica italiana per traduttori (e scriventi) by Mariarosa Bricchi (2018) and Oltre abita il silenzio, Tradurre la letteratura (2019), by Enrico Terrinoni all act as a preface and postface through il Saggiatore. These essays are instructive as well as participatory. They invite the reader to cultivate a direct relationship with the Italian language, whereas often the grammar and the translation are perceived as entities in themselves and, as such, static and immutable – or even extraneous. Instead, they require a greater awareness and interaction on a daily basis, as if they were a heritage to feed and safeguard.

This issue of Testo a fronte contains precious considerations, skilfully combined with experience. The “slant” ingrained in the contributions, a constant urge to “listen” to the text, besides reading it, is of great merit. The idea of supplying the translators’ considerations with their outcomes, by presenting some pages of the translated works in the appendix, is commendable.

This viewpoint is often neglected within the field of Translation Studies but it is fundamental because it allows a meeting with the text, the compelling sentences and the repelling ones that only those who translate really know. Furthermore, there is a call to observe a translation with present parameters and the «capacity to receive the Other without misrepresenting, whilst preserving one’s own true nature», in the name of «hospitalité langagière», as Paul Ricoeur asserted. Above all, a translation should be seen as the realization of a musical score, as a passing performance and, for this reason, re-interpretable – and beyond potential inaccuracies. There is no such thing as a perfect translation. By no coincidence, Susan Sontag was cited: «All translations are sooner or later revealed as imperfect and eventually, even in the case of the most exemplary performances, come to be regarded as provisional».