The website is under construction. We apologize for any inconvenience.
Home / Highlights/ Different from Before – Conversations beyond Covid
Highlights

Different from Before – Conversations beyond Covid 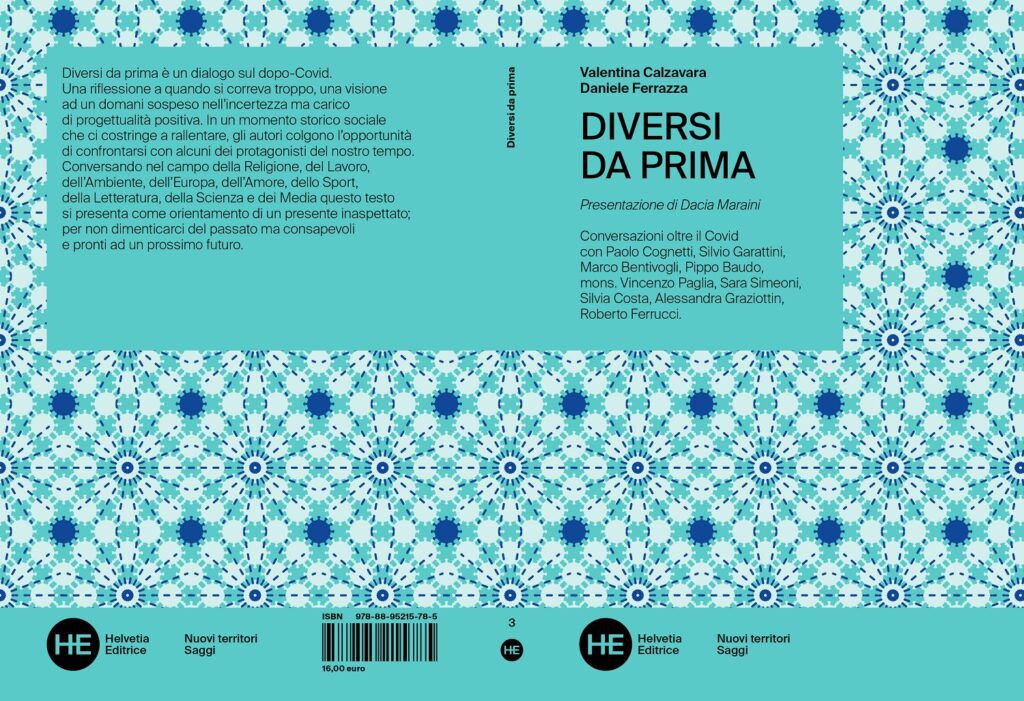 The Italian Cultural Institute in Sydney, in collaboration with the Italian Cultural Institute in Melbourne, is pleased to invite members, students, friends and lovers of Italian culture in general to the virtual presentation of a book that aims at giving an answer to a very pressing question seen from a European perspective: What will become of us, of Italy, of Europe after the long lockdown?

This question was posed by the authors Valentina Calzavara and Daniele Ferrazza to some of the most innovative, often critical and unorthodox voices of our country, capable of giving the issue some kind of perspective.

With the book Diversi da prima (Different from Before), published by Helvetia and written jointly, the two authors investigate the future of Europe, interpersonal relationships, science and research, spirituality, politics and work. After a prolonged period of ‘suspension’, which has put and is putting a strain on our lives, businesses and communities, how can we transform the future into an opportunity for growth? What can be the role of young people in imagining it? And with what tools?

Unfortunately, due to previous commitments related to the presentation of the book in various other locations around the world, it was not possible to involve all the people who contributed to the book, but we are happy to confirm that the conference/webinar will be delivered by both authors as well as Olympic champion Sara Simeoni.

Dacia Maraini, commenting on the volume, has said: “I believe that it is very important to learn something from this disaster. It must serve us as a lesson, first of all to better understand the things we used to take for granted: The importance of freedom of movement, the presence of friends, the presence of loved ones, the relationship with others, the simple gesture of shaking a hand, to hug, to kiss”. With an eye to the future, Dacia urges us to learn how to manage our time in a better way: “It wouldn’t be bad to allow ourselves a moment of calm, of reflection on what really matters in life, a moment of surrender to slowness, meditation, self-analysis”.

The webinar will be held IN ITALIAN on the ZOOM platform and will be available at the following link:

Born in Padua in 1987, journalist Valentina Calzavara writes for the Venetian newspapers of the GEDI Group, in particular La Tribuna di Treviso. For Grazia (Mondadori) she covered Nicaragua. Her articles have been published in various print and online newspapers including: La Repubblica, La Stampa, Il Giornale, Gli Occhi della Guerra-Inside Over. In 2017 she won the “Cristiana Matano International Journalism Award” in Lampedusa.

Professional journalist Daniele Ferrazza was born in Asolo in 1968. He is the news reporter at Nuova Venezia. He has written on the Repubblica‘s Affari & Finanza and Venerdì inserts. He was Councillor for Culture and Mayor of Asolo. He has published, on Nordesteuropa.it, a series of reports on the main roads of the Venetian regions, from which Statale undici: le strade che hanno fatto il Nordest (Marsilio) was born. In 2013 he won the plaque of the President of the Republic at the “Chronicler of the Year Award”.