A reckless entrepreneur, television star, and finally president of the first global superpower: the parable of Donald Trump is a unique one that has marked a break in US political history. The ostentation of his narcissistic personality, his private ideology, the populist construction of his figure as an outsider against the establishment are summed up in Trump\’s inclination to move everything to the \’private\’, in wanting to solve every problem from this point of view, even in terms of international relations. The result is a management of power halfway between the screenplay of the reality-show The Apprentice and that of the TV series House of Cards, a paroxysmal and riotous form of public-private governance of the nation in which members of the Trump family, exponents of the political establishment, figures belonging to the high military hierarchies and Wall Street representatives participate. With a narrative approach, this volume retraces the events of the Trump presidency, proposing a critical and original reading: a \’private presidency\’.

Giovanni Borgognone is associate professor of History of Political Doctrines at the Torino University. He is a member of the board of directors of the journals Passato e presente e Storia del pensiero politico. He is author, among others, of La destra americana. From isolationism to neocons (Roma-Bari 2004), Tea Party. La rivolta populista e la destra americana (with Martino Mazzonis, Venice 2012) and Storia degli Stati Uniti (Milan 2016). 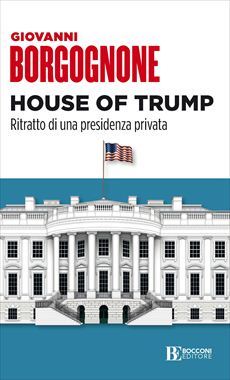