In recent years there haven’t been many translations of Gabriele d’Annunzio‘s works in Europe. There are some exceptions, however. Almost simultaneously, two translations of Faville del maglio, an over-600-page-long collection of prose memoirs published by d’Annunzio between 1924 and 1928 in several volumes, were released in France and the Netherlands. In Paris, in the series Cahiers de l’Hôtel de Galliffet, a large selection of excerpts from the three sections of the Faville, Il venturiero senza ventura, Il secondo amante di Lucrezia Buti, Il compagno dagli occhi senza cigli, appeared in 2020, translated by Muriel Gallot. In the Netherlands, the publisher Marc Vleugels chose to translate Il compagno dagli occhi senza cigli  (The companion without eyelashes) in its entirety. We discuss this and more with its translator, Emilia Menkveld.

When you translated this book, were you already familiar with d’Annunzio? What are your thoughts about d’Annunzio’s autobiography?

I already knew Gabriele d’Annunzio from the Italian language and culture courses I took at the University of Amsterdam. In the Netherlands, in early 2018, for the first time in years, a work by d’Annunzio was published in a Dutch translation by the publishing house De Arbeiderspers. De schoonheid van de nacht (The Beauty of the Night) is a collection of three works by D’Annunzio that were never translated before: Solus ad solam (1908), Notturno (1916), and an excerpt  from his memories, entitled Il libro segreto (1922). This last translation, by Jan van der Haar, was widely reviewed in newspapers and magazines. The verdict of the critics was generally very positive.

The renewed attention to this author gave publisher Marc Vleugels the idea of introducing other works by d’Annunzio to the Dutch public. Vleugels is an individual publishing house known for its high-quality translations, often aimed at an audience of connoisseurs. The publisher himself contacted me and asked me to translate Il compagno dagli occhi senza cigli for him. I started working on the book in autumn 2018 with great enthusiasm, while I continued my work as editor and book reviewer for a national newspaper. Due to the considerable difficulty of the writing, and the fact that I could only work on the translation two days a week, it took me over six months to finish its hundred or so pages. By the end of 2019, the book was already in the shops.

Il compagno dagli occhi senza cigli is clearly autobiographical: it’s set at Capponcina, the Tuscan house where the writer was working on his ‘Venetian novel’ (in which Il fuoco is recognisable). D’Annunzio himself was a student at the Collegio Convitto Cicognini in Prato, where he met his childhood friend Dario. This ability to easily identify the setting and context gave me some advantages as a translator; digital images and a visit to the site were very helpful  to get a clearer idea of the places described in the book. It’s not clear whether Dario, the “companion” of the title, actually existed. As far as I’m concerned, it’s not that important. To the narrator, Dario’s visit to the writer’s house is an opportunity to reflect on the mechanisms of memory, lost friendships, and decay. D’Annunzio transformed the biographical material into fiction. The line between the two is not so important, in my opinion, in assessing the value of the book.

What difficulties did you encounter in the translation process?

Il compagno dagli occhi senza cigli is probably the most difficult text I have ever translated. The exquisite style, full of cultured allusions and metaphors, are definitely not easy to reproduce in translation; in Dutch it can feel artificial. The many literary and historical references also made my work rather complex. D’Annunzio constantly refers to Greek and Latin literature, to the Bible, to Dante, but also to the architecture and history of Florence and Tuscany, to Napoleon and the French Revolution, to the Elizabethan era, etc. Not only did it take me a lot of time to research all of these references, but I also had to think of a way to make the text understandable for Dutch readers, without being too tedious with a long list of explanatory notes. In the end, I only added notes to those passages in the foreign language which meaning is not easy to guess or find. In addition, I added explanations to the most important references in an epilogue.

How was the book received by the Dutch media?

The book has been reported in news publications sections on literature, and reviews have appeared on the Internet. As far as I know, no other work by d’Annunzio was translated into Dutch after the publication of Il Compagno dagli occhi senza cigli. 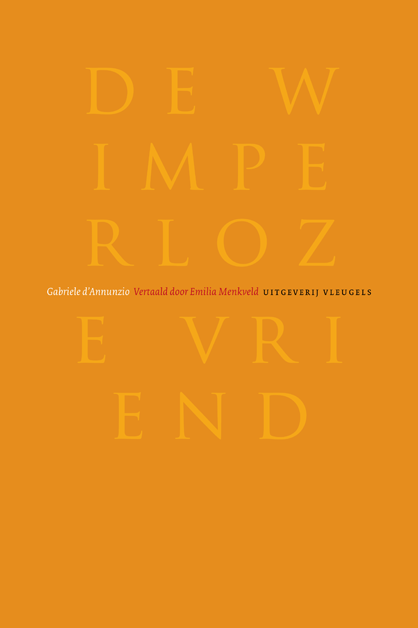