The website is under construction. We apologize for any inconvenience.
Home / Insights/ Surveys/ ILfest – Italienisches Literaturfestival München
InsightsSurveys 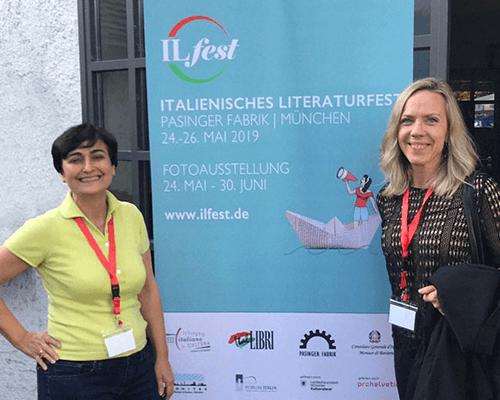 It was born from an intuition by Elisabetta Cavani / ItalLibri bookshop and ILfest is organised by the local Italian Institute of Culture, ItalLibri and Pasinger Fabrik, with the patronage of the Consulate General of Italy, with the support of Monaco’s Cultural Department.

This true festival of Italian books and literature in a city like Monaco which, through its widespread knowledge of the Italian language, the high presence of Italians, the geographical proximity, the cultural affinity and the publishing hub – guarantees all the successful characteristics necessary for the success of this initiative.

Whilst there are over a thousand literary festivals in Italy, only a dozen take place beyond national borders. Furthermore, Monaco city has the highest number of Italians and there are over 10,000 inhabitants that study Italian or who already speak the language.

It is one of the biggest and most important publishing cities worldwide, thanks to the presence of around 140 publishing companies that publish every year, as a first edition, over 8,000 titles, with a turnover of over 1.2 billion euros.  At the Monaco of Bavaria Book Festival, around 250 German publishers present new publications as well as works of existing success. Furthermore, the very high presence of libraries, associations of authors and translators all testify to the Bavarian city’s great interest in literature.

As the director of the Literaturhaus of Francoforte, Hauke Hückstädt, noticed, on the occasion of the Lipsia Book Festival 2018, in recent years the request to meet with authors and translators who deal with themes that move society has increased.  Meeting the author doesn’t just coincide with a mere book presentation but is rather a sharing of emotions, an exchange of opinions with the author and others who have already read or intend to read the book. The queues to receive an autograph testify this desire for direct contact.

ILfest was born from the wish to prepare and accompany the Frankfurt Book Festival / Frankfurter Buchmesse 2023, where Italy will be guest of honour.  We’re talking about the largest German book festival in the context of international publications. Since 1979, a guest of honour is designated and presents its own book market, literature and diverse cultural expressions to the public.

Jürgen Boos, the festival’s  director, has observed a new energy that, in recent years, has animated the Italian culture: a revival is taking place, new dynamics and radical changes are occurring within the Italian book market, including the consolidation of various publishers, the birth of renewed concepts in bookshops and a new book festival in Milan.

ILfest served as an overview of the latest Italian book production, its liveliness and diversity, with a representative choice of “multiplication of narratives” that have emerged over recent years, leading to a growing success of literary genres such as crime and dystopia, the development of the graphic novel as well as the popularity of serials both in book and television format.

The programme included a dozen meetings with fiction writers, non-fiction and books for children (a fundamental sector: 50% of Italian titles that are translated belong to children’s literature); a panel discussion on Italian and German publisher relations;  a discussion with translators; the photo exhibition Italian writers of the twentieth century; a jazz concert performed by the Marrali-Tucci quartet and a cinema projection of an episode of the television series I bastardi di Pizzofalcone.

The second edition of ILfest will take place from the 22nd to the 24th of May 2020 and will have the theme “Movements / Bewegungen” in continuity and exchange with the title of the meeting to be held between German experts in Italian literature at the start of March: movement in space, time, between literary genres and different arts.  Amongst the already confirmed guests are Claudia Durastanti, Davide Enia, Umberto Galimberti, Elvira Mujcic and Andrea Tarabbia: we are confident they will convey the cultural vitality of the Italian literary scene to the German public. Italian culture is, after all, an important part of Bavarian history: let’s try to make a contribution to the ILFest to keep it that way.