How did you become a translator? And how, in particular, did you end up translating from Italian?

Around 2005-2006, I met the writer and publisher Bo Cavefors (1935-2018) in Malmö and he asked me to translate Pier Paolo Pasolini’s unfinished novel, Petrolio, for the publishing house h:ström. I accepted his offer even though my knowledge of Italian at the time was quite rudimentary, a problem I thought I would be able to resolve afterwards. Unfortunately, h:ström didn’t manage to get the rights to Petrolio, but I, nevertheless, ended up translating another book for them. All of this took a few years, during which, studying hard, I taught myself Italian. In some ways it is just a coincidence that since then I have mainly been translating from Italian – publishers suggesting books, etc. – but I think that, above all, it is the result of my love of Italian literature. Besides, almost everything in Italian still needs to be translated into Swedish.

What’s your opinion as regards the current situation for Italian books in the Swedish publishing sector? Has anything changed over the last few years? Are more books being translated? Fewer? Do Swedish publishers have a good knowledge of the Italian book market?

To be honest, my knowledge of the Swedish book publishing sector is not good enough for me to answer your question. I have to say, however, that, in general, the so-called “big publishers” have almost completely abandoned their publishing responsibility, which, basically, means that translations of the most difficult literature are done by the smaller publishing houses. Anders Cullhed’s new translation of Dante’s Vita nova, for example, was published by a small publishing house and the same happened for the translations of the works of a contemporary philosopher like Giorgio Agamben. It’s virtually impossible in Sweden to see large-scale projects that require serious funding, such as translating Leopardi’s Zibaldone in its entirety, as is currently happening in Germany. Nevertheless, as always, there is a lot of good quality work being done by small publishers and journals (more or less unpaid, however), but readers have to make quite an effort to discover this work as there is no mention of it in the media.

You have translated classic authors, such as Dante Alighieri, Giordano Bruno and Giacomo Leopardi, but also contemporary authors, including Andrea Zanzotto, Giorgio Agamben and Amelia Rosselli. What do you think of Italian literature in the present?

Currently, I am reading mainly philosophy and theoretical works, in a broad sense, and I think there are a lot of interesting books being published by a variety of publishers. For about ten years now I have also been following publications of what you might call experimental writing in Italian, but I have a nagging sensation that, of late, this kind of literature has become even more marginal than ever. Having said that, I am always amazed by how many books are translated into Italian compared not just with Swedish, but also other languages, such as, recently, Leo Spitzer’s book on Rabelais for Quodlibet.

How important in your work as a translator is the personal relationships you have with the authors of the books that you are translating? Are you in contact with them when you’re translating a book?

A fair number of the living authors I have translated are friends or acquaintances with whom I am often in contact. It is always very gratifying to translate texts written by people you like. Nevertheless, from the point of view of translation theory, I see no reason why the author of the original text should be considered a guide when writing the translation.

Have any of the books you have translated from Italian been particularly difficult, yet a stimulating challenge?

Without a doubt, Giacomo Leopardi’s Operette morali, published by Celanders in 2015. It is a book that meant a great deal to me on a personal level, and its extremely complex syntax was far from easy to translate into Swedish. But translating should not be confused with an athletics event, which can easily happen when our attention is focused on the difficulty or impossibility of the translation. Even when a text cannot be translated, it still wants to be translated.

Which Italian authors are you currently translating?

At the moment, I’m translating an essay by the philosopher Enzo Melandri, whose major work, La linea e il circolo. Studio filosofico-logico sull’analogia, is one of the most fascinating books written in the twentieth century. Next year I will be translating, among other things, Giordano Bruno’s Cabala del cavallo pegaseo, which I consider to be one of his most beautiful Italian dialogues, even though it is among his least known. 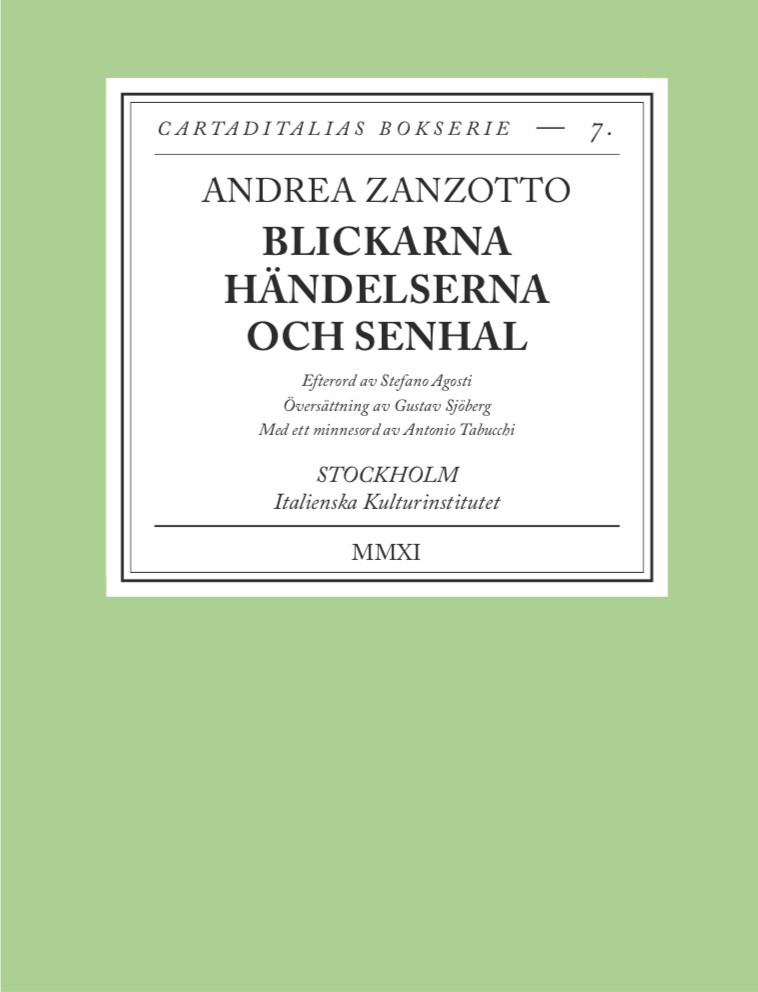