The website is under construction. We apologize for any inconvenience.
Home / Highlights/ Italian Christmas Tales 2020
Highlights 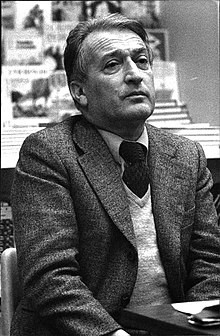 2020 marks the 100th anniversary of the birth of Gianni Rodari, an author who for decades, through his books, has presented his readers an accurate view of the world, while at the same time describing feelings that everyone can identify with. His books have been translated into many languages and have won several awards, including, in 1970, the prestigious Hans Christian Andersen prize, considered the Nobel Prize in children’s literature. From the notes collected in the 60’s and 70’s in a series of school meetings with teachers, librarians, parents and students, in 1973 he published the Grammatica della fantasia (Grammar of Phantasy), which soon became a reference point for those involved in literacy education and children’s literature.

The Italian Cultural Institute of Sydney, in collaboration with the Italian Embassy in barbadoriWellington, intends to pay homage to this great author, together with two other world-renown authors, Italo Calvino and Dino Buzzati, by producing an event involving an association from Ancona, Ponte tra culture, directed by the playwright, director and actor Gianluca Barbadori, and a youth acting school based in Auckland, the Brickworks Drama School, directed by Natascha Diaz and Lauren Jackson. The project is titled Racconti italiani di Natale 2020 – Italian Christmas Tales 2020. The project consists in the adaptation of three Italian contemporary novelists:

for the subsequent reading/interpretation by the New Zealand students, directed by Barbadori with the collaboration of Diaz and Jackson. The performances have been filmed and the video have been published on the Institute’s YouTube channel, which can be viewed at the following links:

They will be available from the 9th of December 2020 onwards.

The spirit of our initiative was above all to create a further cultural bridge, a dialogue between a New Zealand and an Italian entity, through the study and interpretation of these stories by the students from Auckland. The works are in fact designed to create a moment of listening and meeting between very young people eager to share the experience of storytelling and a heterogeneous audience, comprising both peers of the students and adults. The stories lead to reflection through paradoxes that, with a little attention, each of us can identify with during the Christmas holidays.