It is a job she began back in 1973, when the publisher Paolo Boringhieri hired her to translate and edit the works of Freud. It was a monumental task, which took her more than six years to complete. She was then contacted by Roberto Calasso, who gave her the job of revising the translations of German literary texts for Adelphi. In 1995, she became the editorial director of Mondadori’s Meridiani series. We are talking about Renata Colorni, who recently had published an elegant little book, Il mestiere dell’ombra. Tradurre letteratura (“The shadow craft. Translating literature”, Milan, Henry Beyle, 2020), in which she talks about her experience as a literary translator, using a style that is more akin to story-telling, full of passion and totally devoid of technicalities.

I should like to start with your definition of the translator in your book Il mestiere dell’ombra: “S/he is a person awaiting an identity, extremely willing to listen and facilitate, to remain in the shadows, to render her/himself invisible, a person of tremendous humility and devotion, even to the point of masochism, but also a person who is extremely curious and generous”.

The question of a translator’s “invisibility” has long been discussed (and still is). Do you believe that invisibility is an intrinsic feature of this craft?

I don’t think there is any greater compliment you can pay a translator than to tell her that she is invisible. It means acknowledging that she has been able to invent for that author a new form in the target language. At the same time, however, invisibility is also a sort of curse because it relegates the translator to a place in the shadows.

But if a translation is only successful when it doesn’t feel like a translation, isn’t there a danger of making the original text less interesting?

A translation is not successful if it renders the foreign text in a beautiful Italian, in a koinè of facile elegance. It is only successful when the translator, in her attempt to respect the foreign text’s stylistic originality, succeeds in finding a new, different expressive form; when she manages to extend the stylistic heritage of the Italian language; when she produces a text that appears written in a new language, that is seductive and invites imitation.

Which is what happens in the best poetic translations …

Only poets are capable of producing poetic translations. And it doesn’t matter if they’re not that faithful to the original. I remember, for example, once congratulating Giovanni Giudici for his translation of Onegin and asking him where he had learnt Russian. Do you know what he said? He told me that he had never studied Russian – he just paid someone who taught Russian to do a literal translation for him and then reworked the translation, allowing himself to be guided by his poetic inspiration. So, really, it’s the target language that takes precedence.

So there are two stages in the work of translation…

That’s right. There’s the first version, where you make sure that you don’t miss anything in terms of the meaning of the text, its mood, and you concentrate on rendering that. Only then does the translator free herself of the deadweight of the literal translation and reveal her “Luciferian pride”, searching for new forms to transpose the spirit of the text.

In 2010 you published a new translation of Thomas Mann’s Der Zauberberg in the Meridiani series with the new title La montagna magica [The magic mountain]. That was a brave choice when one considers that the previous title in translation, La montagna incantata [The enchanted mountain], was one that readers were very familiar with.

To tell you the truth, the choice of the title was the easiest part, not just because the term “enchanted” appears just once, while “magic” appears several times, but also because it has to do with the very structure of Mann’s Zauberberg. The mountain in the Swiss Alps on which Hans Castorp remains trapped in a luxurious sanatorium from 1907 to 1914 is not passively cloaked in enchantment. It is an active element and is quite disturbing as a result of its erotic enchantment and the intellectual and spiritual transformation it induces – a mountain that is both enchantress and enchanter, so, really, under a spell.

In addition to working as a translator, for sixteen years you also revised the translations of German literary texts for Adelphi, which is often an even more “invisible” job than that of the translator, but a very necessary job.

It is a daunting job and it is the one I have devoted most time to in my career. A reviser does not just have to correct the mistakes made by the translator. That is why I asked the publishers to allow me to translate some of the texts (Bernhard and Canetti). It was essential to gain the respect of the translators, to manage to create a working relationship on both a personal and professional level. A reviser must show that she is able to adopt two viewpoints: she must respect the voice of the author, but also that of the translator. She must work in an in-between space. The most I ever had to intervene in the many revisions of translations I did was in the translations of Bernhard, because, there, I knew that I had managed to find the right voice with my translation and that it was right to keep this voice throughout. In that case, the translators and I forged an alliance at the service of the author. Unfortunately, nowadays, the figure of the reviser is disappearing from publishing houses.

What do you think of the proposal, which is being put forward with ever greater insistence, of giving translators intellectual property rights?

I don’t think that it is a very good idea because, then, all the best translators would want to translate the authors of bestsellers. There would be the danger of having impeccable translations of books that sell well and no translations of Kafka. Undoubtedly, the payment translators receive should take into consideration a book’s commercial worth, but also its literary worth. Besides, in the history of literature it is often books with a small print-run that have stood out.

A very interesting aspect of your reflections on translation is the different attitude that writers and translators have when dealing with the “voice of others”. The writer “reads above all to take something for himself” while the translator listens. It also seems to me that your opinion of the “writer/translator” is not particularly flattering, almost as if the act of translation performed by a writer is merely a means of cannibalising the writing of others. Is this always true?

There are, of course, some wonderful exceptions. Caproni, Tabucchi and Magris, for example. My reasoning is more of a general nature. Writers are highly narcissistic, which leads them to translate merely so they can ‘take’ the writings of others – it is a sort of training ground for them. They are too concentrated on expressing their own voice to put themselves at the service of the voices of others.

Do you think that critics, either militant or academic, attach sufficient importance to translation?

Translators are still battling to have their work acknowledged by literary critics. I’ll give you an example. Many Italian writers over the last few years have “Bernhardised”, that is, they have written in the style of Thomas Bernhard. What they have actually done, though, is to imitate the style of the Italian translator of this Austrian author, namely my style. The language of Bernhard that has become part of our literary heritage is the voice of his translator. But nobody has ever noticed that.

Here, too, there are, of course, exceptions. I find particularly interesting what Antoine Berman has to say. But, generally speaking, I find translating far more interesting than studying translation theory.

What influence has your work as the editorial director of the Meridiani series had on your work as a translator?

It has had a profound influence. The Meridiani series contains classics of all ages and all languages. I had some of the old Meridiani collections retranslated, for example the Virginia Woolf collection, but I also abandoned certain publishing projects because I couldn’t find good enough translators. Translation is the best way, the most effective marketing tool, to sell foreign books. Take the “Simenon case”, which resulted from new translations commissioned by Adelphi.

What advice would you give to young people who would like to become literary translators?

Do you think it is possible to teach literary translation?

You can’t teach people to become writers and, yet, the world is full of writing schools. The same is true of translation schools. They may be useful to teach the tools of the trade, to teach people how to recognise a work’s tone (such as irony), but literary talent, which is needed to be able to translate, is far more difficult to teach. The work of a literary translator is literary and requires a higher-level talent: originality. 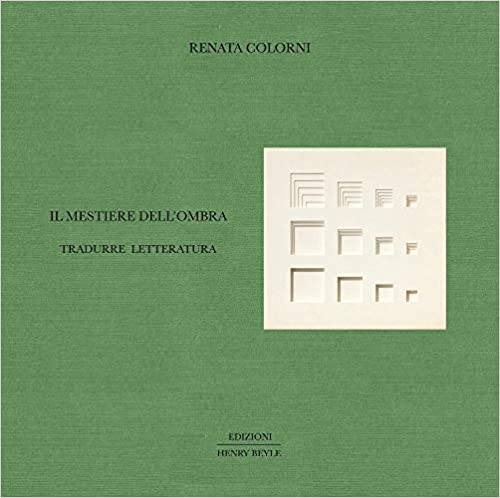