The website is under construction. We apologize for any inconvenience.
Home / Insights/ Surveys/ The translators of Il nome della rosa
InsightsSurveys 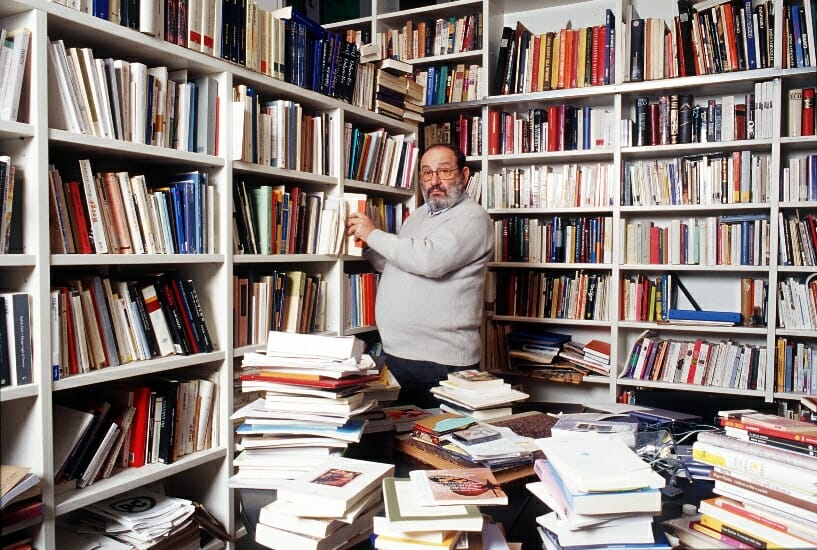 The first thing that springs to mind thinking about Umberto Eco is how I felt that I already knew him and was on the same wavelength as him even before I had ever met him, merely from reading the things he had written that I came across in cultural magazines such as Il cavallo di Troia and Alfabeta, in addition to the leading weekly magazine L’Espresso, the left-wing newspaper il manifesto and, later, in the Corriere della Sera and la Repubblica national newspapers. What I mean is that when our paths finally crossed, at the Bompiani publishing house, I immediately had the feeling that I knew him well, and not just as a writer. It is perhaps no coincidence that our author-publisher relationship lasted thirty-five years, a relationship enriched and integrated by experiences grounded in friendship, a shared vision of things and a love of life. When I arrived, The Name of the Rose had only been published fairly recently and for which he had just been awarded the Strega Prize. Foreign editions were being published all over the world and were causing a great stir among critics because, while Eco was a debut novelist (in his 40s), he could, nevertheless, count on the interest, if not to say the curiosity, of the international academic world, in which he was held in great esteem as both an essayist and a visiting professor.

For most of his translators, translating Il nome della rosa was the summit, most gratifying the moment, of their careers. American translator William Weaver gave the name Rosa to the annex of his house in the Tuscan countryside that he was able to have built thanks to the royalties he received from his translation. A community of translators of The Name of the Rose formed spontaneously and even met up at a conference held at the School for Interpreters and Translators in Trieste. Umberto met each of them one by one, but not before having given them a folder containing a few dozen pages, themselves worthy of publication for the blend of tact and publishing know-how. In these pages he offered explanations of some of the more inaccessible passages for non-Italians, details on the historical and cultural context, lexical alternatives, etc. Naturally, he was able to get on better with the translators whose languages he knew, but he also struck up a lively relationship with the Russian translator, Elena Kostijoukovitch, and the Japanese and Hungarian translators, in line with his well-known theory of “translation as mediation”. The Rose binge lasted quite some time, assisted by the success of the film adaptation of the book made by Jean-Jacques Annaud. Indeed, it took him eight years before he produced another novel, Foucault’s Pendulum, which was his personal favourite and perhaps his greatest work. The novelist in him then felt the need, a definite boon for his readers, to shed light on things related to his research as a scholar and speculation as a philosopher, such as his Postscript to The Name of the Rose and The Limits of Interpretation, as a theoretical support for his Pendulum.

Thinking back about his life, an amazingly full, long and happy life, I began my account with my debut alongside him. Continuing this account of his life would mean making choices as regards the direction to take, a thankless task as one is so spoilt for choice. It is far easier, then, to remember different moments in his life that had as their common denominator his irony, which was never gratuitous. At times it was biting, for dramatic or didactic reasons, depending on whether he was with friends or students. Sometimes his friends became students once more with his rather cruel penchant for quizzing us using the general knowledge tests that had been created for the purpose of selecting the master’s students. Or when a stroll with him in Paris meant revisiting the places and emotions of the great works of popular nineteenth century French literature.
Before becoming a professor, but after his experience working on cultural programmes for the state broadcasting station Rai, he worked with Valentino Bompiani, producing, among other things, a short manual of style for inhouse use (still used today), which he wrote at the same time as his international bestseller How to Write a Thesis. He was the editors’ worst nightmare because he would always find typos, translation mistakes and who knows what else the minute he started leafing through a newly printed book.
Last year, the University of Turin awarded him an honorary degree, his umpteenth. You could feel the emotion of a young man going back to the place where he graduated. Another two were scheduled this year, but he had to stop at forty-one. Monte Cerignone, his retreat, was no longer just a holiday home. His foreign publishers would come here to pay homage, his translators would arrive to add a few finishing touches, and journalists and photographers would gather to interview him whenever a new book was being launched. Here, as a guest, I discovered how tremendously hard Umberto worked. During the day, he would spend hours and hours at his computer, interrupted exclusively by rituals of sociality, such as meals or a swim in the pool in the summer. After dinner, he might watch a film from his film collection and, then, when everyone retired sleepily to their rooms, Umberto would return to his work, feeling an urgent need to finish a chapter, prepare a lecture or write an article for a newspaper.

At the end, he was working on something he cared greatly about and I fear that he departed with the regret that he had been unable to complete this work. He had been included in the Library of Living Philosophers, which involves the publication of a large work containing an “intellectual autobiography”, the contribution of twenty-three scholars from various countries engaged in a critical dialogue with the author and the author’s replies to each and every one of them. Umberto was working on his replies and had planned to complete everything by the end of the year. The Italian edition, La filosofia di Umberto Eco, edited by Annamaria Lorusso, will be published shortly.

Mario Andreose has been working in the publishing sector for several decades. He was involved in Alberto Mondadori’s Saggiatore publishing adventure, working first as a proofreader, then translator, editor, editor-in-chief and, eventually, editorial director. After switching to Mondadori, he was put in charge of the nascent sector of co-editions of children’s books and illustrated books. He was editorial director of the Fabbri Group, which included the Bompiani, Sonzogno, Etas and school editions publishing groups. He held the position of literary director at RCS Libri, created from the merger between the Fabbri Group and the Rizzoli publishing house. Currently, in addition to being chairman of La nave di Teseo, he also writes for the cultural supplement of the Sole 24 Ore on Sundays and is a member of the management board of the University of Bologna’s “Umberto Eco” International Centre for Humanistic Studies. In addition to Voglia di libri (2020), he has also published Uomini e libri (2015).