Aldo Palazzeschi in other languages 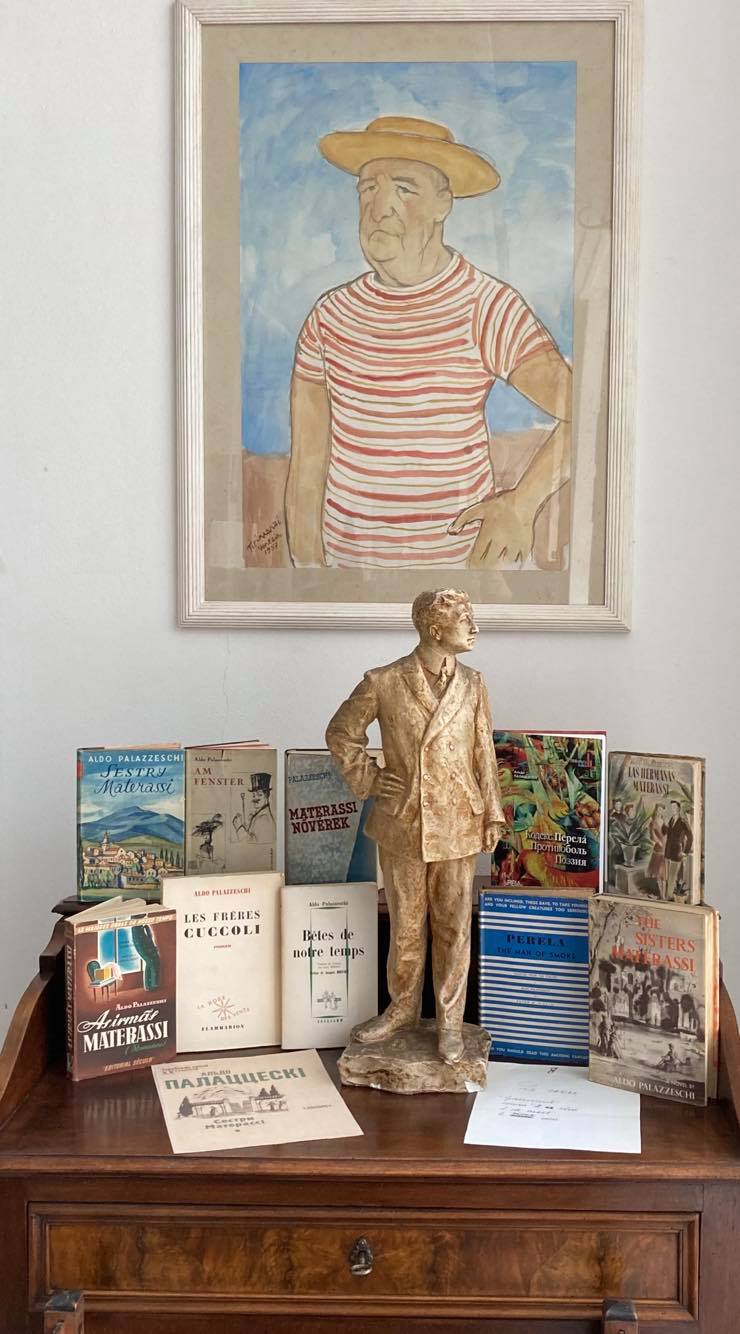 The archive in the University of Florence’s Centre of Studies devoted to Aldo Palazzeschi (Florence, 1885 – Rome, 1974) contains documents revealing the numerous exchanges the writer had with his translators. These frequent exchanges, which in some cases resulted in genuine friendships, highlight the great interest that Palazzeschi took in what happened to his works abroad (translations of his narrative texts, theatre productions and versions adapted for the radio).

An exemplary case is that of Jean Imbert, the translator into French of several of Palazzeschi’s works (Romanzi straordinari, Stampe dell’800, I fratelli Cuccoli and Bestie del ’900), with whom there was an extensive exchange of correspondence. In a letter to the publisher Vallecchi, Palazzeschi insists that the job of translating Fratelli Cuccoli be entrusted to Imbert, by whom he felt “translated and not watered down”. The fact that Palazzeschi paid special attention to his presence in France should come as no surprise, however, as he himself had translated works by French authors (Daudet’s Tartarin and Stendhal’s Le Rouge et le Noir), in addition to writing verse in French (Schizzi italofrancesi). An idea of the publishing relationship he had with “a hypercritical country”, as he deemed France, is provided by a book published in 2010: Juliette Bertrand – Aldo Palazzeschi. Carteggio 1930-1973, edited by Enrica Agnesi. The history of the French Palazzeschi would definitely be missing something were it not to mention the name of Juliette Bertrand, who not only published Gedeone e la sua Stella, La Sora Sofia, Lo zio e il nipote, Pochini e Tamburini and Amore in the literary weekly Les Nouvelles Littéraires, but also translated Il palio dei buffi and Roma, though she was unable to find anyone willing to publish these two works (and, to mention an anecdotal curiosity, Bertrand also translated the well-known Sora Parisina, the mother of cats, who in French becomes Madame Eulalie). But the history of what happened to Palazzeschi in France is full of other episodes: the translation of Il Doge by Simone de Vergennes, with several letters and affectionate postcards in the archive revealing their correspondence; the adaptation for the radio of Roma in 1973 by Antoinette Riva, directed by Raoul Auclair, and the complex episode of the translation of Sorelle Materassi. Countess Filippi di Baldissero schemed a great deal to get Palazzeschi to give her permission to translate this work, which she wanted to save from the “anonymous translations” of translation agencies. Her translation turned out to be very poor, however, and was castigated by Palazzeschi, who in no uncertain terms deemed it “a crime” and “a disaster”. It was not until 1988, with the arrival of a new generation of translators, that Sorelle Materassi was retranslated by Gérard Loubinoux and Emmanuelle Genevois for the Gallimard collection “Le Promeneur”. Loubinox also later translated Un Prince romain and La Conversation de la comtesse Maria, while Danielle Appolonio, Monique Baccelli and Béatrice Sayhi-Périgot translated, respectively, Allégorie de novembre, Le Code de Perelà and Liens secrets et autres recits, all of which appeared in the 1990s, evidence of Palazzeschi’s continuing vitality in France.

Sorelle Materassi is, undoubtedly, his most accessible and appreciated novel abroad. From the bibliography prepared by Simone Magherini we learn that, in addition to the French editions, editions of this masterpiece have also been published in Spain, Finland, the Czech Republic, Sweden, Chile, Serbia, the United States, the Netherlands, Switzerland, Russia, Hungary, Romania, Slovenia, Austria, Ukraine, Brazil, Portugal and Slovakia. In Germany, there have been seven editions published by six different publishing houses. Just before the English edition was published in the United States, Henry Furst wrote to Palazzeschi: “The book starts badly for the English. All those names, for example, obviously cannot be translated”, an observation that did not prevent the book from being well received by both critics and readers alike. In northern Europe, mention must be made of the fundamental role played by Karin de Laval, a Swedish translator of novels and short stories, who prepared the version adapted for radio of Sorelle Materassi, broadcast on 19 January 1955. In Ukraine, the illustrated novel by Ponomarenko was the first book of the well-known collection “Twentieth-century narrative in the world” by Dnipro publishers and, in addition to the excellent translation by Viktor Šovkun, also includes a lengthy afterword, “The rise and fall of the Materassi sisters”, by the academic Dmytro Nalyvaiko, who interprets the book from an antifascist perspective.

Among Palazzeschi’s other works to be well received and sell well, there is an interesting adaptation, Perela: The Man of Smoke by Peter M. Riccio, published in New York in 1936, half a century before publication of Nicolas J. Perella and Ruggero Stefanini’s 1992 translation. During the 1990s, the Greek and Portuguese translations of L’uomo di fumo were also published. As for Russia, Anna Jampol’skaja’s translation of Il codice di Perelà did not see the light until 2016, accompanied by a foreword by Giuseppe Nicoletti, which was followed by Il Controdolore and sundry poems.

Roma was published in Catalan, Swedish, Hungarian and English (USA) a few years after the book came out in Italy, while translations of I fratelli Cuccoli were published in the 1960s in Slovene and German.

In Germany, there have been as many as four translations of Il doge, but apparently all four versions have sold out. This was discovered from the proceedings of an international conference on Aldo Palazzeschi, organised by Willi Jung and Gino Tellini, in the presentation by Birgit Tappert, who also informs us about a number of German translations whose titles are rather different from the original: Am Fenster. Florentiner Veduten um 1900 (‘At the window. Scenes of Florence around 1900’ versus ‘Prints of the 19th century’ [Stampe dell’800]); Die Mechanik der Liebe (‘The mechanic of love’), which contains short stories taken from Tutte le novelle and Il buffo integrale; Freudenschrei und Regenschirm (‘The cry of joy and the umbrella’ versus ‘Story of a friendship’ [Storia di un’amicizia]).

In Polish, there is an excellent translation of Il Doge (Doza) by Anna Cierniakowna, who, in her exchange of letters with the author, reveals how well acquainted she was with literary criticism of the novel.

It is far more difficult to discover his poetry and short prose works to be found in various anthologies and journals throughout the world. It is necessary, however, to mention at least all the work carried out by Theodor Däubler to present the early Palazzeschi as a poet and “incendiary” to German readers. In France, it is not possible to omit either the Contes surréels (Il gobbo, La veglia, La bomba, Il dono and Il punto nero) chosen by Gianfranco Contini and translated by Hélène Breuleux for Italie magique, or his poems translated in verse by Geneviève Burckhardt. In Sweden, we find Karin de Laval once more with Lumachino, published in the newspaper Svenska Dagbladet. The famous Fontana malata was translated into several languages, with mention made here of the Polish version by Jalu Kurek for a small, but refined anthology of Italian futurist poets. In Japan, there are the poems selected and translated by Mitsuo Sato in Utopia and Musica proibita, which, thanks to Hirohide Takeyama, appeared in Racconti fantastici del Novecento italiano. In Brazil, where Palazzeschi’s poetic works have been particularly successful, there are the studies by Égide Guareschi. Finally, in the Russian speaking world, mention must be made of the magazine Foreign literature, and also the collections Twentieth-century poetry of Western Europe and The Italian novella in the twentieth century, both of which contain works by Palazzeschi.