Alessandro Manzoni in other languages 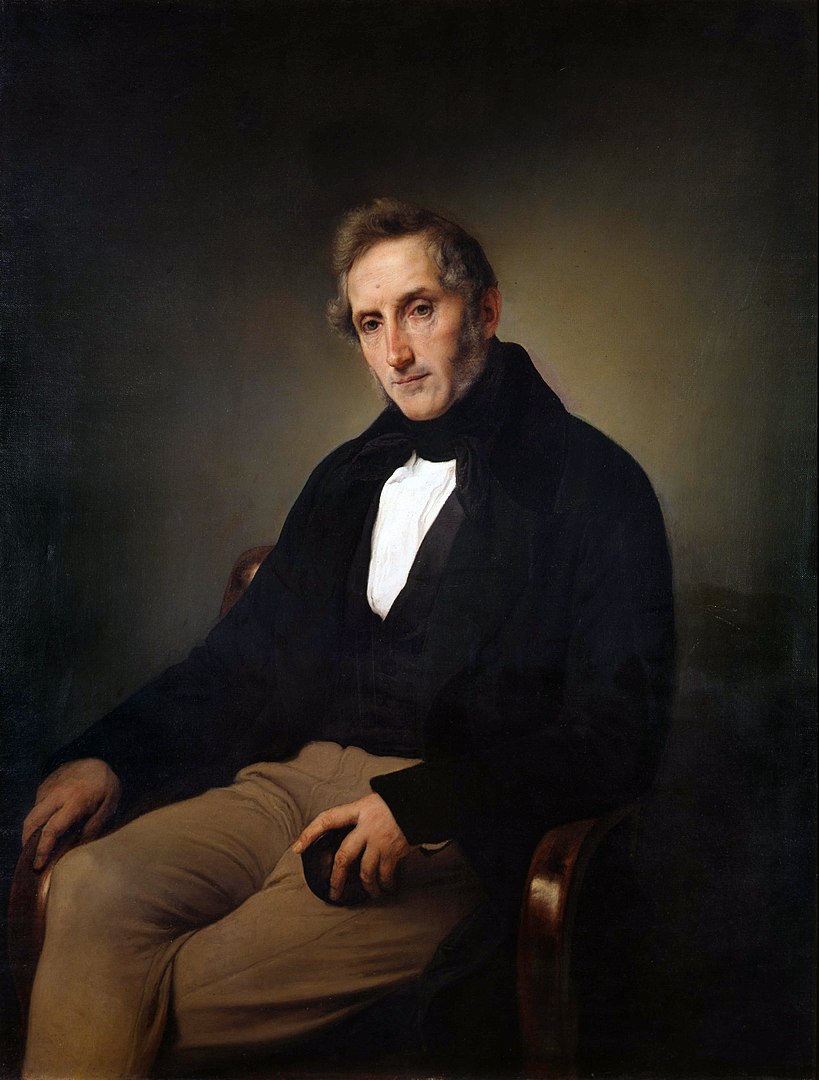 Alessandro Manzoni’s works became quickly known and were already widely read in Europe during the nineteenth century. France, Germany and Spain were the countries in which his works were most successful, where, in addition to I promessi sposi, there were also translations of Il Conte di Carmagnola and Adelchi, Il cinque maggio, Inni sacri and Osservazioni sulla morale cattolica. Elsewhere, there were mainly translations of his famous novel, above all the Ventisettana version (the first edition), from which the historical parts were often removed as they were considered to be of little interest to foreign readers. It is possible to gauge just how immensely successful the novel was in terms of publications from a partial review of the first translations. The first German edition was published in 1827, while the first French and English translations appeared in 1828, and the first Spanish edition in 1833; the Danish translation by Frederik Schaldemose was published between1828 and 1829, the Swedish translation by Per Reinhold Tersmeden in 1832 and the Dutch translation by Petrus van Limburg Brouwer in 1835; the novel was translated into Polish by Placyd Jankowski in 1836 and into Czech by Prokop Ondrák in 1842, while the Greek version, translated by Efstàthios Simos, Markos Renieris and Panajotis Chalikiòpulos, was published in 1846. During the second half of the nineteenth century, there was an anonymous Hungarian translation (1874) and a Serbian translation by Josip Eugen Tomić (1875-76).

The first translation of I promessi sposi in Russia dates back to 1833 and was followed by at least another four 19th-century editions and six 20th-century editions, the last of which was published in 1999 and reprinted in 2011. During the first half of the twentieth century, Renzo and Lucia also arrived in Shanghai, with the first Chinese version in 1935 by Jia Liyan and Xue Bing (pseudonym of Feng Xuebing), which was followed by at least five further editions between the 1990s and the 2000s, with the most recent translation that of Mu Lilin, published in 2013. Finally, the Japanese version by Federico Barbaro and Ogata Sue was published in three volumes between 1946 and 1949.

The novel was extremely successful in France, where there were around forty translations during the nineteenth century alone. This should come as no surprise, however, given that Manzoni, after the period he spent in Paris between 1805 and 1810, continued to have a privileged relationship with French culture thanks to his friendship with Claude Fauriel. Fauriel had a translation of the tragedies published by Bossange in 1823, which was re-edited in 1834, with the translation of just Adelchi republished as late as 1979. With the help of his friend Fauriel, Manzoni had planned for the first French translation of his novel to be published at the same time as the novel was being published in Italy by Ferrario in 1827. Auguste Trognon was asked to do the translation as he had already translated the first French version of Carmagnola, published in 1822 in Chefs-d’oeuvre du théâtre italien moderne by the Parisian publishers Ladvocat, but, in August 1827, he abandoned the project. The following year, two translations appeared in Paris, one almost immediately after the other, both published with the title Les fiancés, which is now the accepted title in French. The first, and by far the more successful of the two translations, by Antoine-François-Marius Rey-Dussueil, was published by Charles Gosselin. This translation was reprinted on numerous occasions before being revised in 1968 by René Guise and published together with Antoine de Latour’s 1843 translation of Storia della colonna infame, Guise’s own translation of Del romanzo storico and an appendix of passages taken from Fermo e Lucia (Paris, Éditions du Delta). The other translation, published by Dauthereau, was produced by Pierre Joseph Gosselin, who ten years later, in 1838, had a revised edition published by Ledentu, in which he made use of corrections suggested by Manzoni himself. Merely for the effort of translating the entire novel, mention should also be made of Jean Baptiste de Montgrand’s 1832 translation (Marseille, Olive) and Giovanni Martinelli’s translation, published by Hachette in 1877, which was also quite successful during the first decade of the twentieth century. Montgrand’s version was praised by Manzoni for its faithfulness to the original, which was helped by the fact that the translator had a direct knowledge of Italian rather than having studied it at school. Montgrand, who had an epistolary relationship with Manzoni, also translated Inni sacri and Il cinque Maggio in 1837 and, with the author’s permission, the Quarantana edition of I promessi sposi (the edition published in 1840), which, however, was published posthumously in Paris by Garnier in 1877, with illustrations by Gustave Staal. In the French-speaking world, there were also numerous editions that were abridged and adapted, above all to suit Catholic tastes. During the twentieth century, full recognition arrived with publication of the Gallimard edition in 1995, translated by Yves Branca and edited by Giovanni Macchia, which has now become the reference version for both specialists and non-specialists alike.

As in France, two different translations were also being prepared in Germany when the Ventisettana edition was published in Italy and were both ready for print at the end of 1827, both with the title Die verlobten. Daniel Lessmann’s translation was the first to be published (Berlin, Vereinsbuchhandlung) and had the support of Goethe. Goethe, who held Manzoni in great esteem, had praised Inni sacri in an article that appeared in Über Kunst und Altertum, the same journal in which he had also reviewed Carmagnola between 1820 and 1821, and also published his own translation of Il cinque maggio in 1823. Lessmann’s translation was followed almost immediately by that of Eduard von Bülow (Leipzig, Hartmann), commissioned by Ludwig Tieck. Von Bülow revised his translation in 1837 and had the new version published by Brockhaus in Leipzig. Compared with the nineteenth century, during which there were about fifteen German editions, including both new editions and re-editions, the interest of publishers in I promessi sposi was even more marked in Germany during the following century, with around forty editions published. The most widely-read German translation was Ernst Wiegand Junker’s version, published in Munich by Winckler Verlag in 1960 and reprinted in 1988 with an introduction by Umberto Eco, with further reprints up till the first few years of the 2000s. Mention should also be made of the bilingual edition of the Quarantana edition translated by Johanna Schuchter and published in Munich by Alber in 1923, and Caesar Rymarowicz’s 1979 translation (Berlin, Aufbau-Verlag), which was fairly successful in the German market at the beginning of the new millennium, at least until 2010. In 2000, the Munich publishing house Carl Hanser published the version of well-known translator Burkhart Kroeber with the title Die brautleute, which had previously only been used in Albert Wesselski’s 1913 translation (which was republished in 1969, however, with the traditional title Die verlobten). Kroeber also translated Storia della colonna infame in 2012.

In Spain, in Both the nineteenth and twentieth centuries, there were around thirty editions of translations of the novel, including both new editions and reprints. The first translation by Félix Enciso Castrillón, Lorenzo, o Los prometidos esposos, published in Madrid by Librería de Cuesta in 1833, was followed between 1836 and 1837 by the most successful version, Los novios, by Juan Nicasio Gallego (Barcellona, Imprenta de Antonio Bergnes). It was reprinted on numerous occasions in both Barcelona and Madrid at least until the 1960s, before being reprinted in Madrid by Rialp in 2001 and 2020. José Alegret de Mesa’s translation, which was published together with Colonna infame (Madrid, Cabello), dates back to 1850. The translation of the Quarantana edition by the neo-Catholic journalist Gabino Tejado, first published in 1859 (Madrid, Imprenta de Tejado), was also reasonably successful until the middle of the twentieth century. Finally, since 1985 the most popular translation has been that by María de las Nieves Muñiz Muñiz (Madrid, Catedra), with two new editions in 2009 and 2015.

Manzoni’s success was more circumscribed in the United Kingdom and the United States, limited, at least until the start of the new millennium, to Il cinque maggio and, above all, the novel (with around twenty editions, including both new editions and reprints, between the nineteenth and twentieth centuries). The first translation, The Betrothed Lovers, which dates back to 1828, was by Charles Swann, an Anglican priest and military chaplain on board a British warship. He gave the translation to the publishers Niccolò Capurro in Pisa when he arrived in Italy, but the same translation was also printed in London by Rivington a few months later. A new, far more complete anonymous translation of the Ventisettana edition was published in 1844 by James Burns, while the first translation of the Quarantana edition, followed by a translation of Colonna, once more anonymous, was published in 1845 by Longman, Brown, Green and Longmans. In the United States, in addition to the first translation in 1834 by Andrew Norton (New York, Dearborn), which was also read in the United Kingdom (London, Bentley), the novel was also translated in the same year by George William Featherstonhaugh (Washington, Duff Green). During the twentieth century, mention must be made of Archibald Colquhoun’s successful 1951 translation, which has been reprinted on several occasions in both the United Kingdom and the United States (by, respectively, Dent & Sons and Dutton & Co), including in 2013, and also Bruce Penman’s 1972 translation for Penguin books. In 2022, a new translation by the American translator Michael F. Moore will be published by The Modern Library in New York. Finally, as regards English-speaking countries, it should be highlighted that since the beginning of the 2000s there has been a rekindling of interest in Manzoni’s works that is not limited to just his novel. His tragedies were translated in 2002 by Michael J. Curley (New York, Lang) and, in 2004, by Federica Brunori Deigan (Baltimore, Johns Hopkins UP), while, in 2004, Joseph Luzzi’s translation of the letter Sul romanticismo was published in the journal Publications of the Modern Language Association.

The betrothed lovers with the column of infamy, Londra, Longman, Brown, Green and Longmans, 1845

The betrothed, translated with an introduction by Bruce Penman, Londra, Penguin books, 1972