The website is under construction. We apologize for any inconvenience.
Home / Books/ Non-fiction/ Come acchiappare un asteroide (How to catch an asteroid)
BooksNon-fiction

Come acchiappare un asteroide (How to catch an asteroid) 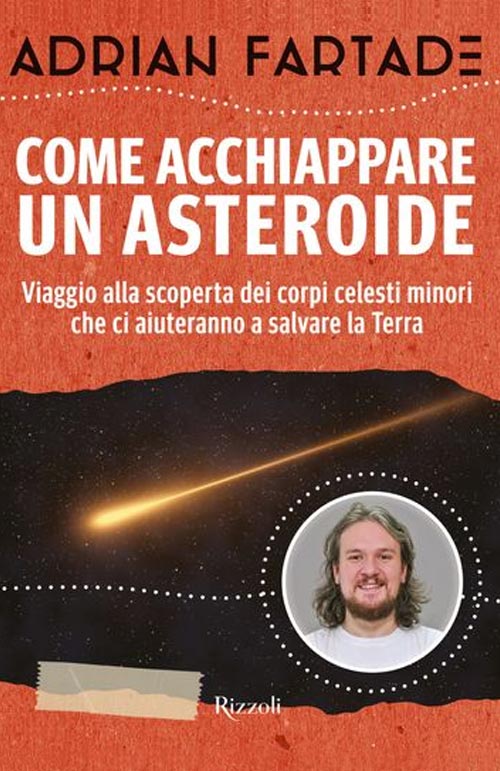 Italy’s most beloved Astronomy populariser, Adrian Fartade, speaks to Greta’s generation: will Space be our solution to our environmental crisis?

If you think that a meteorite caused the disappearance of dinosaurs, and that in 2013, another one hit the Russian city of Čeljabinsk causing damage to 3,000 buildings, injuring 1,200 people and shattering 1 million square metres of glass, we can be nothing but afraid of these bodies that circulate over our heads. We only started studying them recently, when a probe managed to land on one of them… to discover that they are rich in treasures (from platinum to lithium) and that by 2050, they could be the source that will save our poor planet from our indiscriminate exploitation. The dangers and the opportunities coming from the great celestial stone-thrower of comets, meteorites and minor bodies: it’s this exciting unprecedented scenario, futuristic as well as realistic, that Fartade unveils to us with his enthralling educational talent.

The research for the exploitation of resources in Space: an original and actual theme, especially for the young audience of Fartade. The YouTube channel link4universe, that Fartade uses to speak about astronomy, has reached 259,000 subscribers since last year, many of which from the UK (about 118,000 views), from Germany and Switzerland (more than 214,000 views), from France (more than 50,000 views) and from Spain (about 50,000 views).

Adrian Fartade (Bacau, Romania, 1987). A graduate in Philosophy from Siena he is a theatre actor and a self-taught enthusiast of astronomy. With a passion for scientific popularisation, he has, for some years now, been active on the internet on YouTube presenting the most recent discoveries of university researchers from all over the world in an accessible way. He’s a frequent guest on Radio Deejay, and on television he has participated in three seasons of the show C’è spazio in tvon Tv2000. With Rizzoli he has successfully published A piedi nudi su Marte (2018) and Su Nettuno piovono diamanti (2019).