Giacomo Leopardi in other languages 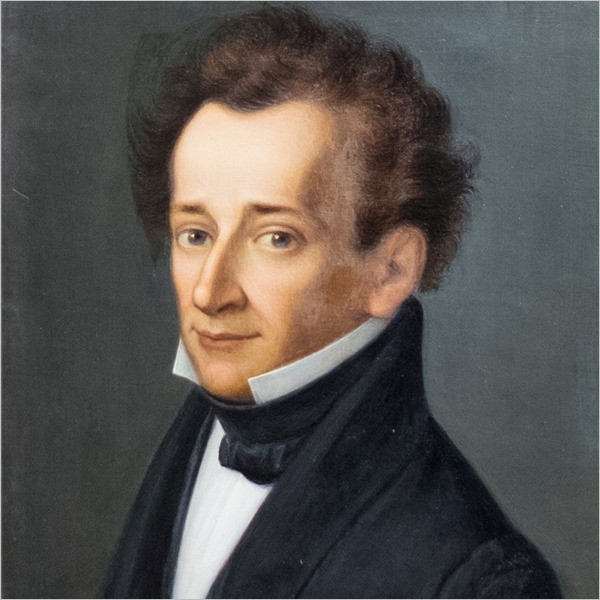 Giacomo Leopardi‘s voice has not gone unheeded beyond national borders, and the various quotations by great intellectuals from the nineteenth century, as well as the last, demonstrate this: Nietzsche, Melville, Beckett, Benjamin, to name a few.
If you look within the French context, the first translation of Canti was published at the Parisian publishing house, Baudry, in 1841. It was based on the Neapolitan edition, dated 1835; Baudry publications were strongly desired in literary salons, where it was very common to meet Italian exiles. On the other hand, Leopardi himself, prompted by his Swiss friend and philologist De Sinner, had revised the Starita edition in anticipation of a publication by the Parisian publisher. It was not long before Charles Augustin Sainte-Beuve published, in 1844, Portrait de Leopardi for the “Revue des deux mondes” along with some integrated translations of the Canti: To Italy, Above the Dante monument, the Infinite, On the evening of the festive day, To the moon and Love and death; however, as Antonio Prete himself wrote, the latter were only “paraphrases of Leopardian poetry” rather than actual translations. The essay has been reprinted in recent years by the Allia publishing house, which has undertaken the translation of the author’s complete work, helping to fuel interest beyond the Alps.
Today, the Leopardian heritage in France is collected by researchers from the Parisian Center Interdisciplinaire sur la Culture des Échanges (CIRCE) who, with the coordination of Jean-Charles Vegliante, have worked on the translations of the Canti and published ten Canzoni in 2014.
First place for the translation, however, goes to Germany: in 1836, in Leipzig, the Canti were published based on the Piatti edition from 1831. In Germany, the circulation of Leopardi’s name began very early, and is also linked with De Sinner, who had taken charge of diffusing Leopardi’s works, especially the philological ones, in the German context: Leopardi himself delivered the news, in a letter to his sister Pauline, dated 15 November 1830, to whom he enthusiastically commented that his friend would have liked to “trumpet it all over Europe”.
But it was the translation of Robert Hamerling, thirty years later, that became the reference for Canti in the German-speaking field and that Nietzsche himself referred to in his quotes. Certainly, however, even Hamerling’s work did not reach the general public: still in 1937 in Venice, during the celebrations for the first centenary of his death, the philologist and Leopardi specialist, Karl Vossler, publicly lamented its limited diffusion to a circle of scholars. His hope of the Munich philosopher did not go unheeded: in those years Rilke worked on the translations of L’infinito and La sera del dì di festa; the magazine “Corona” reported on it in 1938, with reference to the Venetian event.
Anniversaries are also an occasion and a stimulus for new works: the Spanish scholar María de las Nieves Muñiz, took the opportunity offered by the bicentenary of the poet’s birth in 1998 to offer an accurate account of the Leopardian bibliography in Spanish, produced the same year, including the translation of the Canti edited by the Leopardi specialist herself.
The panorama is less lively if you look at the Operetta morali: the French edition, 1992, born within the already mentioned project of the Allia publishing house, edited by Joel Gayraud, fills a large void. Instead, Spanish readers have been able to enjoy the excellent translation of the Operetta morali only since 2015, when it was awarded by the Ministry for Cultural Heritage and Activities in 2018, edited by the Argentinian Alejandro Patat, who aimed to promote Leopardi throughout Latin America.
It is also necessary to briefly mention the 2006 translations of the Canti and Operettas into Japanese, around which a new fervor of studies has developed, thanks also to the Japanese scholar Doi Hideyuki.
Lastly, mention must be made of the international reception of a complex text, not only for its size: the Zibaldone di pensieri. The first translations flourished at the dawn of the new millennium, more than a century after the Italian princeps, published between 1898 and 1900: thanks to the Allia publishing house and the care of the young writer and translator Bertrand Schefer, since 2019 French readers have come to know this text which, published under the same title, is still little explored outside of Italy.
When it comes to translation of the Zibaldone, however, one cannot disregard the worthy efforts of Franco D’Intino and Michael Caeser, who completed, in 2013, Zibaldone: The Notebooks of Leopardi, which represents a turning point in the history of Leopardian reception and attention towards the author.
In the English-speaking panorama, this editorial novelty did not take long before it became a literary case: the many reviews underlined the greatness of a book of which he felt the absence; John Gray, in a long and passionate article, which appeared in the aftermath of the publication in September 2013 on the “New Statesman”, defines this integral translation a “major event”.
Actually, 2013 is not just a translation, but a real new edition, with notes, indexes, and critical and philological apparatus, an almost ten-year project developed within the Leopardi Center in Birmingham and with a team of seven translators. In the United States, in conjunction with a Pennsylvania State University conference on Reading and Translating Leopardi, the edition appeared for Farrar Straus and Giroux, whose president is Jonathan Galassi. It was Galassi himself (and here a circle ends) who, in 2012, signed the translation of Leopardi’s Canti and it was ranked among the best hundred books compiled by the New York Times.