Cecilia Schwartz is an associate professor of Italian literature at Stockholm University. She has worked on transnational aspects of Italian literature, from the role of the literary mediator to images of Italian-ness. She has published numerous essays on the translation, circulation and reception of Italian works in Sweden, including the volume Traveling books. Italian Classics in Sweden (Stockholm 2013), edited in collaboration with Laura Di Nicola. A few months ago, the publisher Carocci published her book La letteratura italiana in Svezia. Autori, Editori, Lettori (1870-2020) which presents an exhaustive picture, unique in its kind, of the presence of Italian books in Sweden over a period of a hundred and fifty years.

When and how did the research behind this book start?

It happened by chance. I was approached in 2011 by Professor Laura Di Nicola of the Sapienza University of Rome (whom I did not know then) to give a talk on Italian literature in Sweden at a conference dedicated to Calvino in Sweden. At the time I focused on the years 1945-85, but then I wondered what happened before 1945 and after 1985. Later, in 2016, I was involved in a research project on World Literature, directed by Professor Stefan Helgesson of Stockholm University and so I was able to continue with my research in a stimulating and creative context.

There isn’t a great deal of research that deals with the editorial reception of works of literature in another language. When you set out to study the presence of Italian books in Sweden, did you look to other similar research in Europe as models?

There were basically two categories of such type of research: it was either studies published in journals which, due to limited space, could not offer an exhaustive picture, or it was anthologies with essays devoted to specific topics. I had a different intention, and namely to give a broad and in-depth picture of the course of Italian literature in Sweden: since I did not find a model to follow, I tried to create one for myself. The book thus stems from the intention to provide a small contribution to the study of the history of Italian literature across borders, offering a methodology that could easily be applied to other contexts.

Are there, in your opinion, any peculiar traits that characterise the relationship between Italian books and Swedish publishing?

Yes, several. I’ll give you three examples. One of the things that stand out is the relatively small presence of escapist literature translated from Italian in Sweden. This absence surprised me, since a Danish colleague of mine, Hanne Jansen, noticed a considerable influence of Italian detective novels in Denmark. In Sweden, most translated books are books that enjoy a certain literary prestige: from contemporary novels valued by Italian and/or international critics to old and modern classics. The example of Italian literature in Sweden therefore does not confirm the prevalent idea that books in circulation worldwide are standardised and easy to read. Another peculiar trait concerns publishers who have been involved in the publication of books translated from Italian. I did not expect, for instance, that the largest publishing house, Bonniers, contributed so much to the success of Italian literature in Sweden in the 1950-70s. After Bonniers disappeared (due to the Swedish publishing crisis in 1970-71), the number of published editions increased but their visibility was lower. One last example concerns the importance of niche publishing houses, starting with Italica, which was inaugurated with an edition of Quasimodo’s poems (before the Nobel Prize) to the more recent Contempo, founded in 2011, which only publishes books translated from Italian.

In your introduction, you draw attention to how asymmetry generally characterises transnational exchanges in the literary sphere (asymmetrical chronology, asymmetrical selection, and the difference between internal and external literary canons). Can you give us some examples that illustrate this asymmetrical relationship?

Yes, asymmetries are present at all levels and are in themselves a fascinating topic that deserves further study. An example of asymmetrical chronology is the discovery and rediscovery of female writers such as Anna Maria Ortese, Dacia Maraini, Fleur Jaeggy and Natalia Ginzburg, who were re-released, re-translated or even translated for the first time as a consequence of the ‘Ferrante Fever’. Even at the level of the authorial repertoire, i.e. the set of translated works of an author, chronological asymmetries are remarkable, if we think, for example, of Italo Calvino’s debut novel, The Path to the Nest of Spiders (1947), translated for the first time in 2016 and consequently received with some astonishment by Swedish critics who were unaware of the author’s more ‘neorealistic’ production. These asymmetries are significant for reception across borders as foreign readers have no choice but to read the works of a translated writer in a different order than the original one.

Selection also tends to be asymmetrical in that some works are selected for translation and others are not. At the level of full repertoire, which includes all the works translated from a certain language, there are texts and writers which are selected more than once, as in the case of retranslations (e.g. Dante’s Comedy, Pinocchio, Family Lexicon, etc.), while others are never translated – they’re the so-called non-translations (Gadda, for example, was never translated into Swedish). The same asymmetrical selection is repeated at the level of the author repertoire, such asi in the case of Deledda, whose novel Elias Portolu has been the subject of no less than two translations and three re-editions, while some of her other works have remained non-translations, including The Mother, one of her most beautiful novels, which has never been translated into Swedish.

One last question, finally, concerns, more generally, the current state of affairs for Italian books in Sweden. Have there been any significant changes over the last fifteen years? What are the most relevant trends today?

I think that the so-called ‘Ferrante Fever’ greatly contributed to the feminine paradigm shift of the last few years. In the wake of its enormous success, a number of women writers who had made their debut long before Ferrante, were re-launched, as I mentioned earlier. It is obvious that Swedish publishers are looking for a ‘new Ferrante’, a pursuit that manifests itself in the current translation of contemporary Italian women writers such as Ilaria Tuti, Rosa Ventrella, and Claudia Durastanti. We should remember, however, that Ferrante had a ‘precursor’ of her own in Silvia Avallone (another example of asymmetrical chronology), who had sparked in Swedish readers a noticeable interest in female friendship in a blue-collar context characterised by social conflict, all themes that fit perfectly into Sweden’s established tradition of working-class literature.

Another trend concerns the rediscovery of 20th century classics: in addition to Ginzburg, the works of Calvino, Pasolini, Morante, Pirandello, and more, are now being translated and re-translated. The symbolic capital of past eras, with which Italian literature has always been well supplied, now also includes the great names of the 20th century. 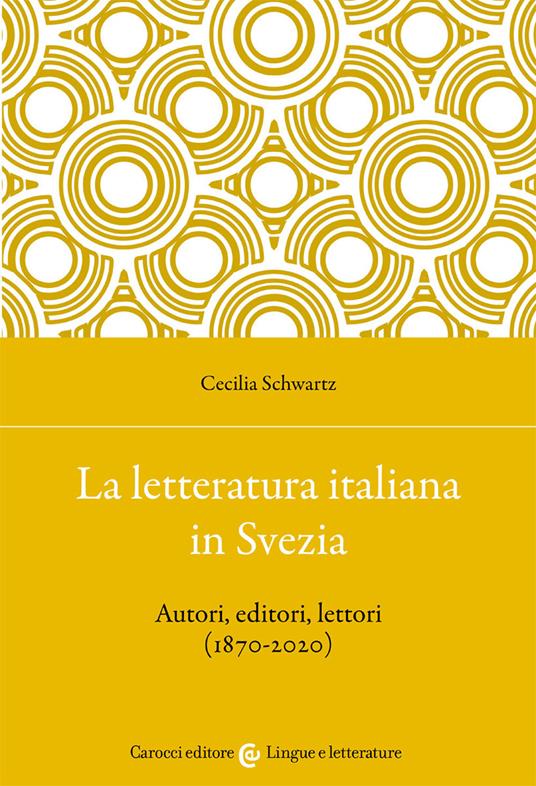