Unlike so many younger translators who receive some form of academic training, you’re entirely self-taught. Could you tell me what led you to become a literary translator?

Nearly forty years ago, I was working in the theatre, as a director. I have to admit I wasn’t very successful, and at a certain point I decided to give up the theatre. I then asked myself what I could do with the rest of my life! One idea was to teach English to foreign students, which I did in fact do for several years; the other was to make use of my ability with languages – I’d studied French at university – and become a translator. I was lucky to get my first translation from French within a few months – Italian and Spanish came much later.

You often teach budding translators. How do you see the role of formal training in this field? What more can be done?

Personally, I feel that translation training should concentrate on the practical rather than the theoretical. That may be a bias of mine, as I never studied translation theory. As I always tell my students, I learned how to translate by translating, and I see it as my duty to pass on to them some of the practical strategies I’ve learned over the years. At the same time, I also think it’s important to point out to them that being a literary translator is not an easy way to make a living. I try not to dampen anyone’s enthusiasm – I truly believe that anyone who really has a passion for this kind of work should at least be given the chance to explore it – but they should be made aware that not much foreign literature gets translated into English and so they will be competing with lots of other people for a small number of jobs. As for your question about what more can be done in the field of formal training, I really don’t know: there are already quite a few academic courses in translation in the UK, as well as mentorships and summer schools. But as already implied, I think it’s important that these institutions don’t just turn out more and more graduates without making it clear to them what a precarious line of work this is.

How did you come to Italian in particular?

That was a decision of mine when I was in my teens. Having started learning first French, then German at school, I realised I was quite good at languages, so I decided to teach myself another language. I can’t remember why I chose Italian – maybe I’d seen some Italian films on TV! I still have the book my father bought me at the time, called Italian in 20 Lessons. So I started teaching myself, though I didn’t take it any further in those days than learning the basics. Later, I started reading lots of Italian books to familiarise myself with literary Italian. It was only once I was established as a French translator that I felt confident enough to tell publishers I could also translate from Italian – and from Spanish, which I’d learned a bit later.

Are there any challenges you encounter when translating Italian authors specifically, compared with French or Spanish?

I don’t like to generalise about a whole literature, so I wouldn’t say that Italian authors are especially challenging to translate. There are Italian authors who are tough to translate and others who are easier, just as there are French and Spanish authors who are tougher or easier. One difficulty I have often encountered in translating from Italian – and it pains me to have to say it – is that Italian books are often not very well edited by their original publishers. They frequently contain unnecessary repetitions, inconsistencies and – worse still – factual errors, sometimes quite serious ones. I feel it’s my duty as a translator to correct such things, or at least to point them out to the English-language publisher, so that they aren’t carried over into the published translation.

You have recently had an experience – a luxury – few translators have.  Will you tell us about it?

I was given the chance to revise an old translation of mine from sixteen years ago, Beppe Fenoglio’s Una Questione privata (A Private Affair). As it’s being reissued early next year by a different publisher, I asked if I could have a look at it in case there was anything I wanted to change, and they said yes. In the event, there were a great many things I decided to change, which I think demonstrates that there is no such thing as a definitive translation and that one can always discover new things in a text as excellent as Fenoglio’s. Plus, I feel I’m a better translator than I was sixteen years ago, and although there’s a lot I’m proud of in the older version, most of which I kept, I genuinely think the newer version is an improvement. As you say, it’s a bit of a luxury to get the chance to improve on an existing translation of one’s own.

Is there any one of your translations from Italian you’re particularly pleased with?

I’m generally quite critical of my own work. When I send a translation off to a publisher, if I feel I’ve got it about 80% right, I’m quite pleased, but I always think there’s room for improvement – as my recent experience of revising the Fenoglio book demonstrates. But one thing I am pleased with is having contributed to the rediscovery of Gianfranco Calligarich’s novel L’Ultima Estate in città, which has now appeared in the UK and USA, in my translation, as Last Summer in the City. It’s a book which dates from 1973, was forgotten for decades, then was reissued in Italy only in the last few years and has now been translated into, I think, about a dozen languages. I first read it about ten years ago and fell in love with it immediately, so when the possibility of an English translation finally came up, I was happy to be the translator chosen. That’s one I’m really quite proud of!

Are there any Italian writers you long to translate, but haven’t yet had the chance to?

One that comes to mind is an author I only discovered a couple of years ago: Alberto Ongaro, who I believe is not very well known in Italy and who is in my opinion a total original. He writes what can perhaps be described as postmodern adventure stories, halfway between Dumas and Borges, often with a fantastical or metafictional element. He’s quite unlike anyone else I know in Italian literature, and I’d love to translate him. 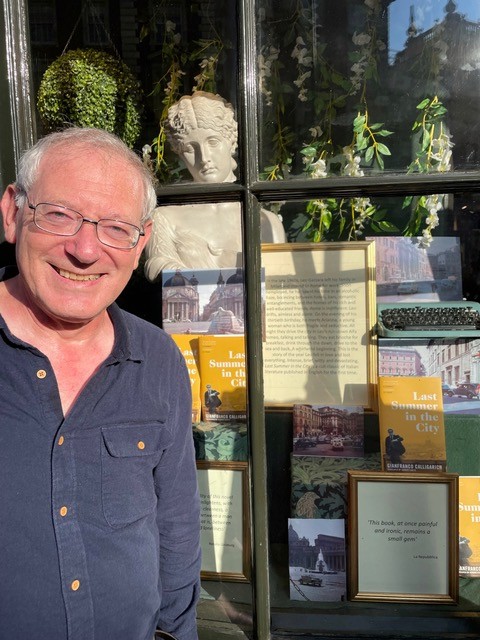