Pinocchio in Other Languages 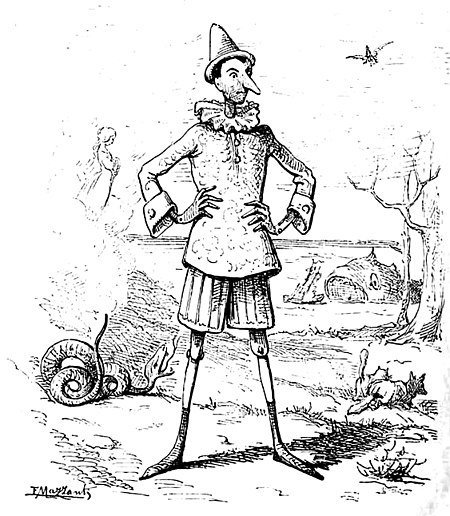 The Adventures of Pinocchio by Carlo Collodi (Florence, 1826-1890) is without a doubt the most translated book in world literature. The overall number of translations is probably even greater than that of the major sacred texts, given the enormous number of complete translations in virtually every language in the world, in addition to the versions in dialect (and not just Italian dialects). There are literally dozens and dozens of different complete translations of Pinocchio in English, French, German and Spanish, just to mention the most spoken languages in Europe. There are also more than thirty different complete translations in Chinese, more than twenty in Russian and at least fifteen in Persian, to give a few examples of less obvious languages. Originally published in serial form in the Giornale per i bambini between July 1881 and January 1883, before being published in book format in February 1883 (Florence, Felice Paggi), Le avventure di Pinocchio. Storia di un burattino (The Adventures of Pinocchio. The Story of a Marionette – the full original title) was immediately very successful. Five editions of the book were published while Collodi was still alive, the last by his new publisher Bemporad (1890), with endless re-editions in the years to follow. After its success in Italy, the book was soon successful internationally, too, despite the difficulties in getting the right register to render the effervescence and musicality of Collodi’s Tuscan language. The first translation into a foreign language was Mary Alice Murray’s English translation (London, T. Fisher Unwin, 1892), which has been republished and re-utilised many times. Pinocchio was an excellent example of the maturity of children’s literature in Italy and the book was often introduced into its new linguistic and cultural contexts when children’s literature had acquired a similar level of maturity in these countries to broaden or bolster new pedagogical and literary horizons. At the same time, the unstoppable success of Pinocchio in both Italy and abroad gradually shifted the perception of the book – rather than a work exclusively for children, it was universally accepted as a literary masterpiece for people of all ages. In some cases, the foreign language editions of Pinocchio, often the work of leading writers and intellectuals all over the world, have become authentic milestones in the literature of the countries in which they were published.

With certain inevitable oversimplifications, it is possible to divide the journey of Pinocchio around the world into four distinct periods. During the first period, from the publication of the story in book format to the First World War, Pinocchio could be found in every country geographically or culturally close to Italy. This is quite natural, given the similar level of maturity as regards children’s literature and a consolidated tradition of printing in both cultural and technical terms. The book was published in Great Britain in the above-mentioned 1892 edition, in the United States in 1901 (translated by Walter S. Cramp, Boston, Ginn & Co.), in France in 1902 (translated by Emilio Treves and printed in Tramelan, Switzerland, by L.-A. Voumard, but distributed in France by Librairie Fischbacher, Paris), in Sweden in 1904 (translated by Aline Pipping and printed in Helsinki, Finland, by Helios), in Germany in 1905 (this was, in fact, an adaptation of the story, written by Otto Julius Bierbaum, while the first real translation was by A. Grumann for Herder in 1913), in Spain in 1912 (translated by Rafael Calleja for Saturnino Calleja, Madrid, but this, too, was partially an adaptation), and so on in the other countries geographically or culturally close to Italy.
Chronologically speaking, the first edition published in Russia (translated by Kamill Danini – Camillo Dagnini in Italian – for M. O. Vol’f, St. Petersburg, in 1908, but produced a few years earlier) should also be included in this period, but in some ways it is a first eccentric translation, similar to the cases of Japan (the complete version in 1925 by Satô Haruo, following at least a couple of abridged versions), China (translated by Xu Diaofu and published first in serial format in the magazine Xiaoshuo yuebao in 1927 and then in book format in 1928 by Kaiming shudian) and perhaps also a Bengali version published in a magazine the exact date of which is not known, that mark the second period, which includes the first examples of Pinocchio’s introduction into less obvious, more remote countries. This was the result of very specific circumstances in these countries – the personal initiative of the son of an Italian family that had emigrated to Russia, the intermediation of English versions in East Asia – while, in the meantime, new editions or translations were being published in the major European languages in ever greater number.

The third period begins in 1940, the year in which the publishing rights to Pinocchio, held by Bemporad, expired, freeing the market from any remaining restriction or scruple, and an adapted animated film version of the story was produced by Walt Disney in the United States. Despite the plot being somewhat soppy and trivialised, it is still a great film both technically and in terms of its narrative. The film’s enormous success contributed to the diffusion of Pinocchio in the rest of the world, including South America, Africa and Asia, with the film initially became popular through its French and English versions in Africa and Asia – in the latter continents through its French and English versions. The first Arabic version of Pinocchio was published in 1949 (by the famous publishing house Dar al-maʻarif in Egypt by an unknown translator); the first Hebrew version in 1955 (Zack & Co., Jerusalem, translated by Nacdimon Roghel); the first Persian version, also in 1955 (Ketabkhane-ye Gutemberg, Tehran, translated by the well-known Iranian writer Sadeq Chubak); the first Swahili version in 1957 within a missionary environment (Tanzania Mission Press, Tabora translated by Father Serafino Bella Eros); the first Amharic version in 1960 (Edizioni Collegio Universitario, Addis Abeba, translated by Lemma Feyssa); and the first Malagasy version in 1973 (Librairie Ambozontany, Fianarantsoa, Madagascar, translated by Elisabeth Ravaoarivelo). In the Indian subcontinent versions were published in Assamese (Don Bosco High School, Guwahati, 1955, translated by Srilakshewar Hazarika), Sinhala (Gunaseta, Colombo, 1957, translated by S. Gunasekara), Malayam (Deepam, Ernakulam, 1959, translated by V.P. Raman Menon), Punjabi (Shrikanth Parkashian, Delhi, 1962, translated by the writer Rajindar Singh Ahluvalia), Tamil (Siruvar ilakkiyappannai, Madras, 1969, translated by Naga Muttaya), Hindi (Ministry of Information, Delhi, 1972, translated by Vishvanath Gupta) …and so on, besides as Pinocchio continued its triumphal march around the world.

We can consider the 1980s as the starting point of the fourth period with the advent of modern globalisation – a period in which we still find ourselves. While in Italy there continues to be an endless stream of new editions and new illustrations, this period has also seen Pinocchio translated into all the languages that were still missing and become an even greater success in countries in which the book was already known. It is truly difficult to keep track of its success all over the world as every year dozens and dozens of new editions and new translations are published, including versions in dialect (and not just Italian dialects), minority languages and even dead languages. Local reasons and the private choices of individual translators or publishers are framed within a solid commercial context: Pinocchio is a steady-seller not only in the children’s market, but also among readers of all ages, so any new edition is guaranteed to sell a sufficient number of copies to convince publishers also to invest in new translations (or new illustrations). While the number of translations based directly on the Italian original is constantly growing, there are also every kind of abridged versions or works simply based on the Pinocchio character, which often have little or nothing to do with the original work (in the wake of the so-called “pinocchiate” phenomenon), but do preserve the warmth of the marionette, his challenges and his captivating vitality.

Besides, despite the story being partly rooted in the geography of Tuscany and the Italian tradition of Commedia dell’Arte, the profoundly existential nature of this work, set within a fluid and in a fact universal spatio-temporal framework, full of archetypal characters, has stimulated – especially when it first arrives in a country – phenomena of acculturation and appropriation of the text, which have made it so familiar to readers that they often forget about the story’s Italian origins. These phenomena become visible in the translation of the names, which for Collodi were of fundamental importance (the Cricket, who assumes the name of a learned pandit in one Bengali version), in the allusions to food (Geppetto’s nickname, Polendina, with its obvious reference to the traditional Italian cornmeal dish, becomes ‘asida, a sort of porridge, in the first Arabic version), in its social references (the story ends with the founding of a theatre cooperative in which the workers free themselves from their owner Karabas Barabas/the Fire-Eater in the famous Soviet rewriting by Aleksej Tolstoj), in the illustrations, which are often adapted to the ethnic context of the countries in which the book is published, and in the forewords or accompanying notes of translators and publishers, who place the vibrant story they have at their disposal in their own towns and cities, and in their expectations as regards education, language and society. These phenomena are sometimes immediately visible in the way that “burattino” is translated. This category may not even exist in the country of arrival or be present, but in very different forms and with very different cultural roles in different parts of the world. Both “puppet” and “marionette” are used in English, as well as muñeco and títere are alternated in Spanish. In certain German versions it has been rendered as kasperl; in Persian it has oscillated between pahlavan-e kachal (‘bald paladin’, lead character in the marionette theatre of Iran) and adamak-e chubi (‘little wooden man’); in Arabic it has been translated as arajuz (from the Turkish Karagöz, lead character of the Turkish shadow play); it has also been rendered symbolically as ‘image of man’ (isariolona) in the Malagasy version; and so on. A library containing all the different complete translations of Pinocchio, rewritings, abridged versions and works based on the story that have been published so far in every language and dialect across the world – an already enormous library that is getting bigger all the time – would offer a picture of humanity from a very perceptive angle.