On 26 June 2022, the doyen of Italian letters, Raffaele La Capria, novelist, essayist and author of the screenplays of several famous films, including Francesco Rosi’s Le mani sulla città, Golden Lion at the 1963 Venice Film Festival, passed away in Rome at the age of almost 100.

Despite the success of some of his books in his homeland, Raffaele La Capria‘s success in the French-speaking world was rather late. If in 1963 Seuil published the translation of what was to remain his most famous book, Ferito a morte(Blessé à mort, Strega Prize 1961, translated by Rose-Marie Desmoulières), it would be forty years before a new title of his was published in a French bookshop (a few chapters of the novel Amore e Psiche, which was published in Italy in 1973, had appeared in 1976 in the magazine Lettres nouvelles by Michel Sager).

The impetus for a whole series of new editions in French was provided by an international study conference, held in Caen from 18 to 19 May 2001, directed by Paolo Grossi, who would play an important role in promoting La Capria’s work in France in the following years. Entitled Raffaele La Capria ou de la littérature comme autobiographie intellectuelle, the conference was attended not only by La Capria himself, but also by numerous Italian (Alfonso Berardinelli, Raffaele Manica, Emanuele Trevi, Filippo La Porta, Silvio Perrella, Domenico Scarpa, Massimo Onofri, Cristina Terrile, Sergio Blazina) and French (Denis Ferraris, Pérette Buffaria, Vincent d’Orlando) scholars. The proceedings will be published by the publisher Liguori of Naples in 2002 under the title Letteratura, senso comune e passione civile.

Fleurs japonaises and La Mouche dans la bouteille : éloge du sens commun (which contains, in addition to the texts gathered in the Italian edition of La mosca nella bottiglia, 2002, also some essays that appeared in the volume Lo stile dell’anatra, 2001) were published by Climats and translated by Jean-Marc Mandosio in 2004 and 2006. The Italo-Swiss publisher Pagine d’arte then proposed a French version in 2011 of La nostalgie de la beauté (translated by Nathalie Castagné) and in 2012 Capri et plus jamais Capri (tard. René de Ceccatty).

The most recent title in French was published in 2016 in the Cahiers de l’Hôtel de Galliffet series directed in Paris by Paolo Grossi: Interviews impossibles (tr. Vincent d’Orlando, preface by Silvio Perrella), which brings together for the first time in one volume three ‘impossible interviews’. Raffaele La Capria was a true forerunner of the ‘impossible’ interview, i.e. addressed to a deceased person, when he produced a long radio dialogue with William Faulkner for RAI in 1960. In the volume of the Parisian ‘Cahiers’, the ‘interviewees’ are, in addition to William Faulkner, the Latin historian Tacitus and Raimondo di Sangro, Prince of San Severo (1710-1771), a singular figure of freethinker and scholar, a sort of Leonardesque genius with Faustian traits.

Les interviews impossibles was presented in Brussels in June 2016 by the author himself and Silvio Perrella, in what will remain La Capria’s last appearance abroad.

Many titles by Raffaele La Capria are still inaccessible to non-Italian speaking readers. Among the most important are the collection of essays Letteratura e salti mortali (published in Italy in 1990) and, among his more recent works, at least the autobiographical writings of L’estro quotidiano (2005) and Novant’anni di impazienza (2013). But his entire production of the last two decades would deserve more attention from foreign and, in particular, French publishers. 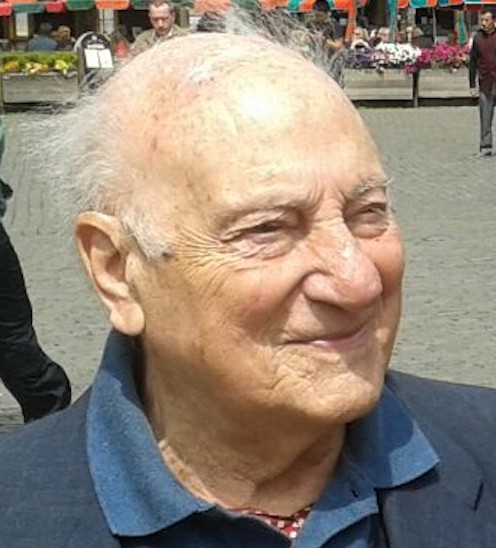