Sibilla Aleramo in other languages 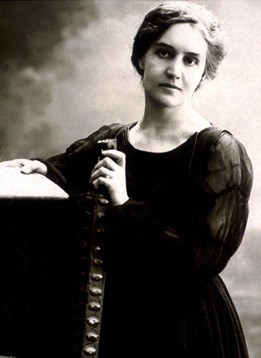 Rina Faccio (1876-1960), an emancipated woman of many talents, was reborn as a writer under the pseudonym Sibilla Aleramo, producing short stories, novels and poetry. She became famous both in Italy and abroad thanks, above all, to her first novel, Una donna (A Woman). Despite the inseparable link between her literary production, diaries and correspondence, scant attention has been paid to her works, especially outside of Italy.

The case of Una donna
Una donna, “a book that I thought was necessary […] revealing to the entire world the soul of the modern woman”, was published in Italy on 3 November 1906 by the Turin publishing house Sten. The book was an immediate success. The first translation – by José Prat into Spanish (Una mujer, 1907) – was followed, as early as 1908, by a Swedish translation by G. Branting, a German translation by Nina Knoblich, an English translation by Maria Hornor Lansdale and a French translation by Pierre-Paul Plan. The Russian translation by Elena Lazarevskoj was a bit of an anomality as it was published in the Russian magazine Obrazovanye (1908). The Polish translation by Stanisława (Soava) Winawer was also published in a magazine (Prawda), in instalments between 1909 and 1910.
Una donna received a certain amount of criticism, but the novel was also greatly admired. In Italy, Luigi Pirandello was one of those who had something very positive to say about it: “few of the modern novels I have read contain a drama so serious and profound in its simplicity and are able to depict this with such skill, […] so controlled and yet so powerful”. While the book was republished in Italy throughout the twentieth century, it did not fare so well abroad. After the publication of the translation into Polish in 1910, there were no further translations until 1959, almost 50 years later, when a translation was published in Czechoslovakia. There seems to have been a partial rediscovery of the author between 1970 and 1990, when new translations of the book appeared in Germany, France, Spain and the United Kingdom. The book was also published for the first time in the Netherlands (1978), Greece (1979), Portugal (1983), Denmark (1985) and Iran (1993). Since 2000 the book has been republished in France (2002 and 2007), and also translated into Albanian (2007), Catalan (2013) and Macedonian (2015). There is even a translation of the book in Sardinian (2011). The most recent foreign editions of the book have been published in Spain (2020) and the United Kingdom (2020), in the latter case by the renowned Penguin Books. There is also a recent translation into Arabic (2018).

Following works
Despite the rather random way in which the book has been published abroad, Una donna has, nevertheless, been translated in a total of eighteen different countries. This figure serves to highlight the stark difference in reception between this work and Aleramo’s following works, many of which were totally ignored by foreign publishing houses. There are no translations, for example, of Liriche (1915), Andando e stando (1921), Momenti (1921), Il frustino (1932), Sì alla terra (1935) and other works, including her diaries and other writings published posthumously.
After her successful debut, only in France was any kind of attention paid to Aleramo’s following works and even there this attention was limited and discontinuous. Il passaggio, “a lyrical autobiography” (Zancan, 2006), published in Italy by Treves in 1919, was published in French by Rieder in 1922. The following year, Endimione, a one-act dramatic poem, translated into French by Pierre-Paul Plan, received a lukewarm reception when performed in Paris. The collection of essays Gioie d’occasione (1930) had its French translation by Yvonne Lenoir published in 1933, receiving the Latinité prize that year. A number of other works that have only been translated into French had to wait a long time to be published, such as the 1938 collection of essays Orsa minore: note di taccuino, which was published in Paris in 2003, more than sixty years after its original publication in Italy. Aleramo’s most translated work after Una donna boasts a mere three foreign editions. This novel, Amo dunque sono (1927), which marked the start of Aleramo’s relationship with the Mondadori publishing house, was published first in Hungary (1928), and then, much later, in France (1992) and Spain (2017). The collection of poems Selva d’amore (1947), still with Mondadori, won Aleramo the Premio Viareggio (1948), but has, nevertheless, only been translated into Catalan (1987). Aiutatemi a dire, a collection of poems published in 1951, has only one translation, published in Russia in 1952. Her diaries, the publishing rights for which were sold to Feltrinelli in 1955, and collections of letters have been little more successful. Lettere 1956-1958, containing her correspondence with the poet Dino Campana, first published in 1958 and then republished in 1987 with the new title Un viaggio chiamato amore, was translated much later into French (2003) and Catalan (2012). It was also turned into a film of the same name in 2002, directed by Michele Placido and distributed by Rai Cinema. Of her works published posthumously, Diario di una donna: inediti 1945-1960 (1978) has only been translated into German, with two editions (1980 and 1991), while Lettere d’amore a Lina (1982) has been published in Germany (1984) and the Netherlands (1986).