St. Francis of Assisi in other languages 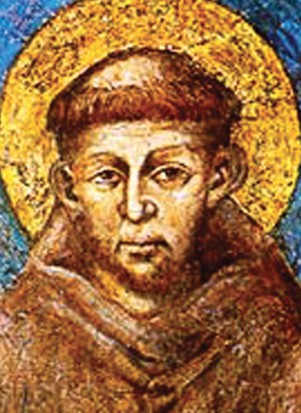 Identification of an author
St. Francis of Assisi (1181 / 82-1226) is not, in the strict sense, a writer and his fame, now worldwide, goes beyond the confessional sphere. It is linked to the personality of the man himself and to the figure of the saint. The historiography of Franciscan studies involves history and hagiography. It is not only his Writings that compose the moral, spiritual and intellectual testament of the friar minor, who was the inspiration for the Franciscan Order but also the memory of his deeds which became a model for a new, humble and empathic approach to the world and to all creatures.

Why and how to translate Francesco?
Francis’ writings were often “dictated” by Poverello and then copied, transcribed and disclosed outside Italy, with inevitable variations by the friar’s companions. The first compilation of Francesco’s Writings dates back to the mid-thirteenth century (Code 338), a period that was intensely committed to collecting information material. The contribution of Brother Leone, Poverello’s companion, scribe and secretary was emblematic of the diffusion of Francis’ school of thought. The history of Franciscan translations generally mirrors the history of editions in Italy and elsewhere: the edition of 1623 is due to the Irish, Lukas Wadding, the first textual enhancement of the so-called Opuscula. The more than three hundred translations of the Writings are now traceable throughout the world in thirty-two languages. They constitute an exceptional publishing phenomenon, in particular, for an author from the Middle Ages.

Who are the translators?
The friars minor, (through the Franciscan publishing houses) were very active and translating has always been their historical vocation, but not exclusively, because the texts also interest Christianity and secular scholars and, therefore, the more generic publishing houses. Poverello’s texts have been translated mainly in countries of strong Catholic culture but not only: the polysemic character of his message aroused, and still arouses, the interest of scholars of philology, philosophy or anthropology all over the world, especially in Anglo-Saxon countries.

The corpus issue
There are translations of Francis’ writings and also translations about him. They are sometimes accompanied by famous biographies (Celano and Bonaventura) or by the texts of Chiara d’Assisi, d’Antonio di Padova and Iacopone da Todi. Among the most published and translated titles are the Cantico, the first poetic compositions in the vernacular, the Regole, especially in the minority sphere and some other “favorite” texts such as the Audite Poverelle found in 1978. The editors also often add the translation of the Fioretti. Reconstructing the history of the translations entails confronting the delimitation of the corpus with the typology of the writings. The translations are based on the most authoritative critical editions that have consecrated thirty authentic writings by Francesco: those by K. Esser (Die Opuscula des hl. Franziskus von Assisi, 1976 and 1986 with Italian version) and, above all, those by C. Paolazzi (Scripta, 2009). The ascertained texts are the Regole e Esortazioni, the Lettere, including testament texts, the Preghiere e Lodi, amongst which is the Cantico di frate sole.

Blossoming translations.
The texts were composed in Latin or in the vernacular of the Umbria region so the first ever translations were Italian, dated 1781 and 1782 (Opuscoli di S. Francesco d’Assisi: Recati in volgare con alcune annotazion, the most recent and complete dates back to 2003 (Franciscan sources. New edition edited by E. Caroli); The translations into Italian that stand out the most are by A. Vicinelli (Gli scritti di San Francesco d’Assisi e ‘Fioretti’, 1955) and G. Petrocchi in (Francesco d’Assisi: gli scritti e la leggenda /Francis of Assisi: the writings and the legend, 1983).
In the nineteenth century Paul Sabatier contributed to the enhancement of Francesco’s writings and, as a consequence, the translations in Europe multiplied. In the first half of the twentieth century, fifty translations were done into French, German, English, Polish; those in Spanish, Portuguese appeared – they are the linguistic areas that remain the most representative today – and in other national European (into Croatian in 1976) and regional languages. Outside Europe, editions and translations appear in Arabic (1953), Japanese (1958 then 1988), Indonesian (1959) or Vietnamese (1968).
In the second half of the twentieth century, translators faced the question of the exhaustive collection of “Franciscan sources”, called Totum in French or Omnibus in English. The Écrits, documents et premières biographies by T. Desbonnets and D. Vorreux, 1968, stand out for their critical wealth (numerous re-editions up to 2003). In the United States tradition of the English Omnibus Sources for the Life of St Francis begins, edited by M. A. Habig and R. Brown in 1972 (then 1992, 2008) and (Early Franciscan documents between 1999 and 2002).
The profusion of translations, due to the Iberian Franciscans, is remarkable: the Escritos, Biografías, Documentos de la época by J. A. Guerra in 1978 (then from 1995 to 2003). The wealth of translations launched in the seventies reaches a peak in the eighties, a turning point, due to the anniversary of the Franciscan centenary and numerous re-editions and important new editions appear: into English (The writings of St Francis of Assisi, edited by H. Backhouse in 1994, after almost a century of abstinence, into Portuguese (Escritos, Biografas, Ducumentos: Fontes franciscanas, with 6 editions from 1982 to 2005), into German in the wake of the works by K. Esser (Die Schriften des heiligen Franziskus von Assisi, edited by L. Hardick and E. Grau, 7 ed. From 1980 to 2001) and, above all, the prestigious Totum (Franziskus-Quellen edited by D. Berg and L. Lehmann in 2009). In the second half of the twentieth century and at the beginning of the twenty-first century, translations into other languages spread: into Finnish in 1981, Norwegian and Slovenian in 1982, Maltese in 1986, Greek in 1994 , Slovak in 1994, Romanian in 1997, Basque in 2002, Bosnian in 2005, outside Europe into Zulu (1984), into Kiniyarwanda (1991), into Thai (1997); in India, the English version is used.
The French translation, edited by J. Dalarun, François d’Assise. Écrits, Vies, Témoignages, was released in 2010. It is a unique research in terms of ambition and competence: they are two volumes for a total of 3418 pages, a work that is part of the profitable French tradition of Franciscan studies and it completes the enterprise collection of all sources according to the custom of the Totum.