Tozzi in other languages 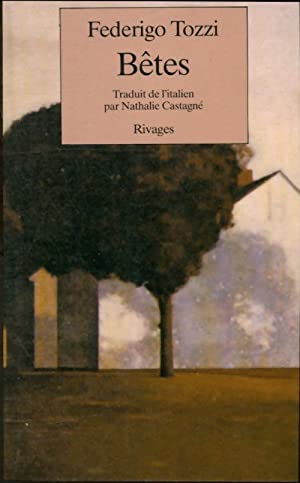 Tozzi is a difficult author and when you read any of his works, you must accept that it is a challenge. His novels, prose and essays are not light reading – you do not read them to distract yourself, but to understand and find out more. His worldview is brutally honest and at times despairing, but also full of vitality and extremely poetic. His descriptions have the representational qualities of figurative art, his language like chiselwork, a form of craftsmanship compared (by his buddy Borgese) to that of a blacksmith, to which I would add through subtraction, not addition. He reveals worlds, profound truths that are often painful, but capable of touching our souls. Writing about his first love or his troubled relationship with his domineering father and submissive and suffering mother, his difficulties in getting on with his peers, Tozzi’s themes are always minimal, sketching human types and essential relationships, but with a depth that creates a hole in the page, pervading the reader’s imagination. In addition to the prototypes, father-mother-son-girlfriend, there are the extras in whom, from time to time, a detail – their eyes, mouth, nose, forehead or even their ears – is made larger, deformed, totally altering their faces through expressionist synecdoche. Like his characters, the natural and urban landscape is highly expressionist, in other words certain elements are highlighted and deformed through a lens of great artistic and emotional sensitivity, enhanced by his readings of philosophy, psychiatry and psychology, all subjects that were constantly changing and growing during his lifetime, but also by the figurative arts, which he also wrote about in his critical works. His writings are set in the places in which he lived and, therefore, above all in the area around Siena, Siena, Florence and Rome. For a long time he was considered a provincial author, but Tozzi’s literary production is very much European. While the most explicit demonstration of his xenophilism is perhaps his translations from French (of works by Henry Frichet and Victor Hugo), as someone who was self-taught, as well as – if not better than – Svevo or Montale, his education was nourished by numerous influences from the most diverse fields of recent humanistic culture, reading the works of authors from a previous generation and his contemporaries, such as Ibsen, Strindberg, Maeterlinck, Nietzsche, James, Ribot, Kafka, Joyce, Woolf, Hardy and Roth.

Tozzi’s literary production arrived in Europe after his death. The most complete mapping of the translations of Tozzi’s works is Federigo Tozzi. Bibliografia delle opere e della critica (Bibliografia e informazione, Florence, 2008), carried out by Riccardo Castellana, together with Paola Salatto and Antonello Sarro. From this book and my more recent survey, it emerges that by 2007 there were around fifty translations into thirteen European languages: French, English, German, Dutch, Spanish, Swedish, Portuguese, Hungarian, Romanian, Catalan, Slovak, Czech and Serbian. Up to that year the translations were mostly into French (9), English (8), Romanian (5), Dutch (4), Spanish and Swedish (3), Portuguese (2), and Hungarian, Catalan, Slovak, Czech and Serbian (all 1). His most translated work is the novel Con gli occhi chiusi (ten translations), followed by the novel Tre croci (nine translations), the novel Il podere (eight translations), the collection of prose Bestie (five translations), the novel Ricordi di un impiegato (two translations), and the novel Gli egoisti and the play L’Incalco (one translation, although there is now another translation of Gli egoisti).

Since 2007 (the year in which Castellana’s survey finishes), from what I have been able to discover there have been the following translations: in 2008, the collection of short stories L’amore in Hungarian; in 2010, Tre croci and, in 2011, Il podere, both into Croatian; in 2012, Bestie, in 2016, Con gli occhi chiusi, in 2019, Cose e persone and, in 2020, Gli egoisti were all translated into French; in 2015, a revised edition was published of the first ever translation of Tozzi, dating back to 1921, the English translation of Tre croci. During the last few years, as proof of the growing interest in this author from Siena, who is now part of the canon and in the position of importance he deserves, namely alongside Pirandello and Svevo, there have been a number of translations into non-European languages: in 2015, the short stories Elia e Vanina and La stessa donna (from the collection L’amore) were translated into Arabic, and, in the spring of 2021, Con gli occhi chiusi into Chinese, together with an appendix of selected letters from Novale.

Translations depend on the culture of the target country, but even more importantly on the degree of success a work has at home while it is being translated, starting with new editions offering a certain visibility in the press through reviews. After that, how readers and critics react to the translation in the target country is extremely important as it can have a chain effect, as happens, for example, in the case of immigration. It would be very interesting to see how the titles of works are translated, but that would require a polyglot comparative literature scholar. Another point to consider is to what extent the translators are ‘translators of’ a certain author or translators who also translate that author, and in any case how many other contemporary authors they translate. In the case of Tozzi, they are translators of Italian authors of great prestige, who, like Tozzi, are held in high esteem by engaged, cultured readers. To give an example, the main contemporary translator of Tozzi into French, Philippe De Meo, has translated, among others, Gadda, Savinio, Montale, Caproni, Zanzotto, Pasolini, Manganelli and Bonaviri. It is essential, in any case, to render the identity of translators explicit. For reasons of space and coherence, mention here is made only of translators whose work has been published since 2007 (namely, after the bibliographical data provided in Castellana’s survey): for Hungarian, Adrienn Borsics; Croatian, Mina Dordevic; French, Philippe Di Meo and Alessandro Benucci; Arabic, Wafaa Raouf; and Chinese PeiPei Xie.