Andrea Zanzotto in other languages 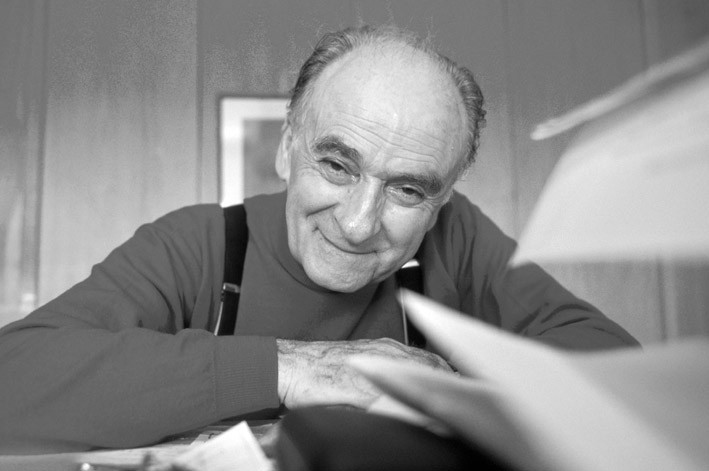 Andrea Zanzotto (Pieve di Soligo 1921 – Conegliano 2011) started to be translated into other languages and published abroad sometime after the publication of the original versions in Italian, beginning with the collection Dietro il paesaggio, published by Mondadori in 1951. This time lag was due to the difficult task of translating complete collections, which we will focus on here, ignoring his many individual poems published in magazines and journals, as it is far less complicated to study his anthologies published in translation. This, in any case, appears to be the format of Zanzotto’s poetry that has been most successful internationally, given the density and challenging nature of his poetry. The carefully selected collections of his poems have been successful in many countries.

The aim is to follow the translations of his poetry in a chronological order in different geographical areas. The first area in which a collection of Zanzotto’s poetry was published appears to be Scandinavia. Two of the poet’s poems – one from Vocativo (1957) and the other from IX Ecloghe (1962) – appeared in the Swedish anthology Elemantära tankar, edited by Estrid Tenggren and published by Bo Cavefors in 1968, seventeen years after the first collection of Zanzotto’s poetry had been published in Italy. 1968 was also the year in which Zanzotto’s best-known collection of poems, La Beltà, was published in Italy. It was not until 2012, however, that another collection of Zanzotto’s poems could be read in Swedish, with the complete translation of Gli Sguardi i Fatti e Senhal by Gustav Sjöberg (Blickarna händelserna och senhal, Stockolm, Italienska KulturInstitutet, series “I Libri di CARTADITALIA”, 2012).

The first translation of a fairly broad selection of Zanzotto’s poetry to appear in English was in 1975 (Selected Poetry of Andrea Zanzotto, edited and translated by Ruth Feldamn and Brian Swann, published by Princeton University Press, republished in 2016), which includes a large selection of poems from Dietro il Paesaggio (1951), Vocativo (1957), IX Ecloghe (1962) and La Beltà (1968). Ruth Feldamn and John Welle, a scholar who studied the poet, edited and translated a selection of his poems taken primarily from Filò (1976) and Idioma (1986) (Peasant’s Wake for Fellini’s “Casanova” and Other Poems, published by University of Illinois Press, Urbana and Chicago, in 1997, with drawings by Federico Fellini and Augusto Murer). A few years earlier, in 1993, a collection of his poems taken from La Beltà and Pasque, translated by Antony Barnett, was published in Canada (Poems by Andrea Zanzotto, A-B. Lewes). Another anthology of his poems, Selected Poetry and Prose of Andrea Zanzotto (University of Chicago Press), edited and translated by Patrick Barron et al. was published in 2007. It was not possible to read Fosfeni (1983) in English until 2010 (Fosfeni. Poems, translated by Pasquale Verdicchio, Montreal, Guernica).

Anthologies also appear to be the preferred format in Spanish, a language in which there are, however, relatively few translations of Zanzotto’s work. A selection of his poetry, Del Paisaje al Idioma. Antología poética, with a “self-portrait” of the autor, was published in South America in 1996, edited and translated by Ernesto Hernandéz Busto (Universídad Iberoamericana-Artes de México, Colonia Lomas de Santa Fe – Colonia Roma). More recently, in 2011, an anthology of his poetry, La muerta tibiez de los bosques. Poesía selecta, translated by Mara Donat and Giampiero Bucci, and a selection of his prose, El (necesario) mentir. Prosa selecta, translated by Eduardo Montagner Anguiano and Giampiero Bucci), were published in Spain, both by the Madrid publishing house Vaso Roto Esenciales.

Zanzotto’s translators are often scholars who have studied his work or they tend to collaborate with such scholars, almost as if the translation of Zanzotto’s poetry, with its rich literary heritage, is itself a form of critical analysis. In addition to the English and Spanish scholars who translated Zanzotto’s work, there is also the Estonian translator, Maarja Kangro, who translated an anthology of his work (Hääl ja tema vari. La voce e la sua ombra, Itaalia keelest tõlkinud Maarja Kangro. Eesti Keele Sihtasutus, Tallinn, 2005).

The languages in which, currently, there are the most complete collections of Zanzotto’s poetry are German and French, both languages of special importance for the poet. German was the language of two great poets, Fredrich Hölderlin and Paul Celan, who were authentic guiding stars for Zanzotto, while French was a more familiar language for the poet, being spoken at home as both Zanzotto and his father had lived as emigrants in the French-speaking part of Switzerland. French was also the language Zanzotto translated from for Mondadori and Rizzoli, publishing houses for whom he occasionally acted as an adviser. Moreover, French was the language of the culture Zanzotto was, undoubtedly, closest to and paid greatest attention to, as can be seen from both his early symbolist and surrealist inspirations, and the clear influences of the philosophical, historical and linguistic changes that swept through France in the 1960s and 1970s, which are particularly evident in his more experimental works from Beltà (1968) onwards.

Moving on to French, it is possible to note straightaway that much of Zanzotto’s work has been translated into this language, starting, in 1978, with the publication in the magazine Po&sie of five Petrarch-like sonnets from “Ipersonetto” in Il Galateo in Bosco, translated by Gérard Genot. This publication appeared in the same year that the collection was published in Italy. It was not until 1986, however, that the entire collection could be read in French (Le Galatée au Bois, Arcane 17, “L’Hippogrife”, Nantes, 1986), translated by Philippe Di Meo, who became the main translator of Zanzotto and had a major role in promoting the poet’s work in France. This was, more or less, the period in which French readers started to read a wide selection of contemporary Italian poetry in translation. Zanzotto’s popularity started to grow in what was a particularly positive moment for Italian poetry in France, as indicated, for example, by the creation of the series “Terra d’altri” by Philippe Renard and Bernard Simeone for Verdier in 1987, currently edited by Martin Rueff, another of Zanzotto’s translators (see issues 109 and 110 of Po&sie, “1975-2004. 30 ans de poésie italienne”, Paris, Belin, 2004; but translations of poems by Zanzotto also appear in other issues of this magazine; moreover, Rueff translated and introduced Zanzotto’s famous work in prose, Premesse all’abitazione, issue 120, Prémisses à l’habitation, pp. 45-60). The series “Terra d’altri” also presented and re-presented the “Third Generation” poets, as well as a selection of contemporary poets, who were translated and published by other French publishing houses, too. Indeed, the 1990s in France marked the beginning of a thirty-year period that has seen numerous translations of many of the most important collections of Italian literature. The trend now is more towards extreme contemporary literature. Many of the translations of Zanzotto’s works by Di Meo were published during the 1990s and 2000s – poetry anthologies (poems from Vocativo and Idioma and short, previously unpublished poems, which were later published in modified versions in Sovrimpressioni, Revue franco-italienne “Vocativo”, Arcane 17, Nantes, 1986; Du Paysage à l’idiome. Anthologie poétique 1951-1986, translated and with a foreword by Philippe Di Meo, Maurice Nadeau – Unesco, 1994; Vers, dans le paysage, Creil, Dumerchez, 1994), selections of prose (Au-delà de la brûlante chaleur, translated and with an afterword by Philippe Di Meo, Paris, M. Nadeau, 1997); critical works (Essais critiques, Paris, José Corti, 2006); and the many complete collections translated by Di Meo over the years (Filò/La Veillée pour le Casanova de Fellini, with a letter and drawings by Federico Fellini, éditions Comp’Act, Chambéry, 1994; La Beauté/La Beltà, Paris, M. Nadeau, 2000; Météo, with translations also from the Veneto dialect by Di Meo and an afterword by Stefano Dal Bianco, Paris, M. Nadeau, 2002; Idiome, Paris, José Corti, 2006; Phosphènes, Paris, José Corti, 2010; Vocatif suivi de Surimpressions, Paris Éditions Maurice Nadeau – Les Lettres Nouvelles, 2016).