Anna Banti in other languages 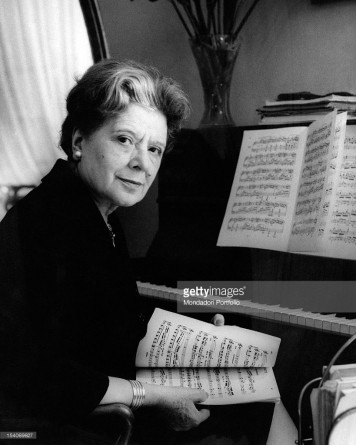 The diffusion of Anna Banti’s works (pen name for Lucia Lopresti) has been unsteady and characterised by a series of recoveries and abandonments by numerous translators and publishers. From 1963 to 2019, translations were covered into eleven languages: Albanian, Czech, French, English, Dutch, Portuguese Romanian, Slovak, Spanish, German, Turkish and in 2019, The Penguin Book in London inserted the short story Miss in its Italian short stories volume.
The most translated title is Artemisia, with a total of seventeen editions. But the first title to be translated, in the Iberian Peninsula and in France, was La casa piccola e Le mosche d’oro (“The small house and The Golden Flies”). Livros de Brasil from Lisbon was the first publisher to propose a work by the writer to the European public: A pequeña casa (1963). In 1966, the editorial Delos-Aymá of Barcelona published Las moscas de oro, translated by
J. B. Cuyás Boira, while Plon of Paris proposed the translation of Rose-Marie Desmoulière, with the title Les Mouches d’or. The only other foreign language edition of this book was to be Zlaté mušky (1981), by Tartan in Bratislava.
Artemisia’s international fame began in the early seventies (1972), when Univers publishing house in Bucharest published its first translation in a single volume, along with La monaca di Sciangai (“The nun of Shanghai”). The success was confirmed and, just two years after the first Italian edition, they also published La camicia bruciata (“The burnt shirt” ,1975). The late 1980s and early 90s mark the highest moment in the expansion of Anna Banti’s writing on the international scene. In these years, Artemisia was translated four times: into English by Shirley d ‘Ardia Caracciolo (1988), into French by Christiane Guidoni’s (1989), into German by Sylvia Höfer’s (1992) and into Spanish by Carmen Romero (1992). Over the following years, the book appeared in new, sometimes unexpected, foreign markets: Holland (1996), Albania (2008) and Turkey (2011). The translation released in the United States by the University of Nebraska and re-proposed in 1995 on the English market by the Serpent’s Tail in London in 2002, was made into an audiobook, thanks to the Volunteer Services for the Visually Handicapped of Wisconsin. In Germany, three publishers published the same version of the work a few years after: List from Monaco; Fischer Taschenbuch from Frankfurt and also Ullstein Taschenbuch from Munich. In Spain, on the other hand, the two major centers of literary culture – Barcelona (Versal) and Madrid (Cátedra) – simultaneously presented the same translation of Artemisia to the Spanish public, later to be re-proposed by Alfabia in 2008.

Few other works have been translated. New York stands out for three initiatives: the publisher Peter Lang published the only translation of the author’s latest work, A piercing cry (1996); the academic magazine “Forum Italicum” hosted Paola Carù‘s translations of “The Truth about Beatrice” and “Laura’s Pleasures” (1998), articles published in “Paragone”; The Modern Language Association of America offered a collection of short stories The Signorina and Other Stories (2001).
France and French culture have had a particular importance in the literary story of Anna Banti. In a letter to Giuseppe Leonelli, dated February 4, 1973, the writer said: “I was reading in the original language, my grandmother was half French and French is my second language”. It is precisely in Paris, in the 1990s, that there was an important recovery of her works which has not occurred elsewhere. Balland published the title Les jardins de Boboli (1991), “The burnt shirt”. In 1996, at the small Aralia publishing house, Histoire d’Arabella and Lavinia disparue, followed by Nous y avons cru are released.
Finally, on April 2, 2020, the English edition of Artemisia was re-proposed by the HopeRoad publishing house in London. The numerous translations of this work, unveiling tragic war-scars, redeem the silence with which it was received when it first appeared and constitute a recognition of the writer’s courage, as she did not resign herself after the destruction of the manuscript during the bombings of 1944. Susan Sontag, in the introduction to the volume, writes: “What makes Artemisia a great book – and unique about Banti’s work – is this double destiny of a book lost and re-created. A metaphor for literature, perhaps. And a metaphor for reading, militant reading – which, at its worthiest, is rereading – too “. The fate of Anna Banti’s writing, on an international level, seems to be just this: suspended between loss and recovery, between oblivion and rebirth.