The website is under construction. We apologize for any inconvenience.
Home / Books/ Non-fiction/ È facile diventare un po’ più vegano (it is easy to become a bit more vegan)
BooksNon-fiction 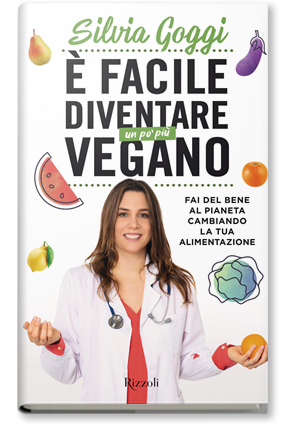 A thorough but accessible book for us all to become “a little more vegan”, in order to take care of ourselves and of the planet.

If someone had told Doctor Silvia Goggi, a nutritionist, that she would become a vegan five years ago, she certainly wouldn’t have believed it. Yet, that’s exactly what happened. The vegan choice is “right”, for ourselves and the planet, it’s reversible, it can even be partial and, above all, it’s easy: you just need to shop accordingly, organize your meals, know the scientific advantages and… learn not to be annoying in the eyes of those who are not vegan. In this book, with scientific accuracy and clear language, Silvia Goggi explains why we must – and we can – all become a little more vegan.

Sales ranking: In the top 10 bestseller list between the last week of January and the first week of February 2020.

Silvia Goggi graduated with honours in Medicine and Surgery at Università degli Studi di Milano and specialised with honours in Food Science at the same university. She’s a co-author of the international guidelines for plant-based diet planning. In her clinical practice she assists patients, mainly mothers and children, to better plan their diet. She lives in Milan where she works both at her private practice and at the first clinic dedicated to mothers and babies that follow vegetable based diets within the Humanitas San Pio X hospital.

Sales ranking: In the top 10 bestseller list between the last week of January and the first week of February 2020.