Close
In other languagesInsights
10 January 2023

Gabriele d’Annunzio in other languages (part one)

The international reception of Gabriele d’Annunzio (1863-1937) was facilitated by the French translation of his works, which projected him onto the European scene as an avant-garde writer in line with decadent and symbolist trends. Nourished on French culture, D’Annunzio considered France the ideal terrain for the dissemination and affirmation of his modern vision of art. Towards the end of 1891 Georges Hérelle (1848-1935) proposed to d’Annunzio the translation of L’Innocente. Under the title L’intrus, the novel was first serialized in the Parisian newspaper Le Temps (end of 1892) and then published as a volume in 1893 by Calmann-Lévy. Translations of other novels followed. Giovanni Episcopo (Episcopus et Cie, 1895); Il piacere (L’Enfant de volupté, 1895), Trionfo della morte (Triomphe de la mort, 1896), Le vergini delle rocce (Les Vierges aux rochers, 1897); Il fuoco (Le Feu, 1901) were first published in prestigious magazines such as Revue de Paris and Revue des deux mondes and then as volumes by Calmann-Lévy: there are numerous new editions of these volumes up to the Second World War.

Not content to have become an international novelist, D’Annunzio was also keen to promote his dramas. In 1897, he thus had Hérelle translate La città morta (The Dead City) almost at the same time as he was writing it and tried to pass it off as originally written in French – something he would later do with Le Martyre de Saint Sébastien. Despite the lukewarm reception, La Gioconda and La Gloria (collected, together with La Ville morte, in the volume Les Victoires mutilées, Calmann-Lévy, 1903), La figlia di Iorio (La fille de Iorio, Calmann-Lévy, 1905), and Francesca da Rimini, (Calmann-Lévy, 1913) all appeared in French translation, although not all were staged.

The translations of d’Annunzio’s poetry were instead limited, due to the author’s perennial dissatisfaction. An anthology of texts from his first poetic collections, Poésies (1878 – 1893), Calmann-Lévy, 1912, was published in 1912, while the translation of Laus vitae, on which Hérelle worked for many years, remained unpublished. It would be published only posthumously, in 1947, by Calmann-Lévy, in a volume edited by Guy Tosi.

The first translations into English followed the wave of success of the French translations and were strongly influenced by them. Trionfo della Morte was translated in the United States by Arthur Hornblow (The Triumph of Death, G. H. Richmond & co, 1896) and in England by Georgina Harding (Heinemann, 1896). In both cases, the text was subject to numerous cuts.  Harding, with the collaboration of Arthur Symons (who was in charge of the sonnets), translated also Il piacere (The Child of Pleasure, Heinemann, 1898) in an edition that reproduced the chapter order of Hérelle’s version. Il fuoco (The Flame of Life), translated by Magda Sindaci under the pseudonym Vivaria Kassadra, was published in the same year as the Italian publication by various publishers in London (Heinemann), Boston (H. Fertig) and New York (L.C. Page & Company). Arthur Symons, a literary critic associated with the Symbolist movement and an important mediator for d’Annunzio’s work in English-speaking countries, translated several of d’Annunzio’s plays, among which La città morta (The Death City, Heinemann, 1900); La Gioconda (R. H. Russell, 1900); Francesca da Rimini (Heinemann, 1902). Symons also translated La figlia di Iorio and La fiaccola sotto il moggio, which however, were never published.

As Cesare De Michelis (1989) has shown, d’Annunzio was introduced to the Russian public as early as 1890. In 1893, at the same time as the French book translation, L’innocente was published in Severnye cvety, a journal associated with emerging Symbolist poetics, in Michail Ivanov’s translation. Numerous translations of d’Annunzio’s texts can also be found in Skorpion, the main journal of Russian Symbolism. Among D’Annunzio’s translators and critics, we find some of the leading authors of the time: Jurgis Baltrušaitis, Valery Bryusov, Alexandr Ivanov, Alexandr Blok, Mikhail Kuzmin. Between 1910 and 1912, two editions of D’Annunzio’s works in twelve volumes came out, but neither of them included poetry. During the years of d’Annunzio’s so-called ‘French exile’ (1910-15) France assumed an important mediating role for Russia. From this moment on, it was mainly theatre (translated by Jurgis Baltrušaitis) to be successful, with a preference for works composed in French. D’Annunzio’s fame among Russian intellectuals culminated with Vsevolod Mejerchol’d’s direction of La Pisanelle in Paris (1913), starring Ida Rubinstein. After the 1917 revolution, D’Annunzio’s fame survived mostly among Russian exiles. In the Soviet Union, only the texts closer to verism, such as the Novelle della Pescara, remained in circulation.

The success of Hérelle’s translations also struck Rubén Darío, a cosmopolitan intellectual of Nicaraguan origin, who in 1894 published the first article on d’Annunzio in Spanish in Rivista de América (issued in Buenos Aires). This was followed by the first translations into Spanish, published in Buenos Aires, in the volume Traducciones (1897) by Leopold Díaz. Following the Argentinian reception, d’Annunzio’s fame also reached Spain, where the main novels were published by Maucci (Barcelona) in paperback editions. In 1900, El Inocente and El Fuego were published, in the translation by Tomas Orts-Ramos, followed by El Placer, translated by Emilio Reverter Delmos, and El Triunfo de la Muerte, by Orts Ramos. In Madrid, Ricardo Baeza, an intellectual of Cuban origin, worked on the dramas. In 1909, Baeza translated La città morta (La ciudad muerta) and Sogno di un mattino di primavera (Sueño de una mañana de primavera) for the publishing house Mundo Latino. Other works followed, including an edition of La figlia di Iorio (La Hija de Iorio) with an essay on D’Annunzio’s theatre. In 1929 Baeza planned to publish d’Annunzio’s entire theatrical oeuvre for Mundo latino, a project that was interrupted by the Spanish Civil War. He continued his work in Buenos Aires, where, thanks to the large Italian community, d’Annunzio’s works continued to be published in new editions and had some success even after the Second World War.

In Japan, the first to translate d’Annunzio was Bin Ueda, who, unfamiliar Italian, translated directly from French. Ueda included five poems by d’Annunzio, translated by him, in his anthology of modern Western poems, Kaicho-on (1905). In 1901, he published the collection Miwotsukushi, which included translations from Terra vergine and Trionfo della Morte. The unabridged edition of Trionfo della Morte was published in 1913 by Choko Ikuta, a well-known translator and critic, and became a best seller. Il piacere (Tōkyō, Hakubunkan 1914) was published the following year, in a translation by Sohei Morita, a novelist and translator from various European languages. Another notable translation is that of Sogno d’un tramonto d’autunno by Mori Ogai, one of the founders of modern Japanese literature. D’Annunzio’s fame for the generation that followed was thus supported by the notoriety of his translators. The situation changed after the Second World War, when d’Annunzio, in Japan as well as in Europe, became an inconvenient, ’embarrassing’ author. 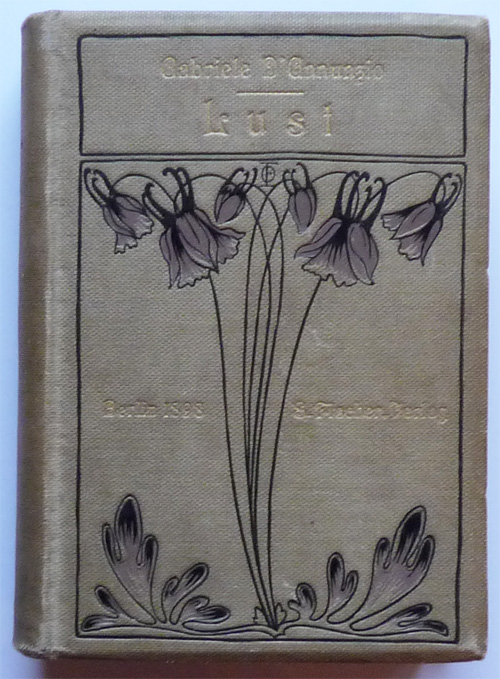