What can you tell us about this translation experience? Did you enjoy translating Fabio Bacà?

Fabio Bacà’s writing is very complex, especially his long, melodically rhythmic sentences. And it is a good demonstration of the major difficulties of translating from Italian into French: Italian is an elastic language, whereas French is rigid. Italian allows repetitions, an overabundance of adjectives and adverbs, which French does not. However, all elements of the source language must be rendered in the target language as fluently as possible. A good translation must give the reader the impression that the book was written in their language. The source language must never transpire. The more complex the language, the more difficult the task.

The originality of the novel is not only in the style, but also in the point of view, the dynamics and the narrative mechanisms. The way the world is described has a rather Anglo-Saxon slant, probably due to the author’s readings. In this sense, Bacà’s novel is not very ‘Italian’, and it also departs from the trends of recent years. Because there is a lot of homogeneity in what is currently published in Italy, and this book stands out from the rest.

The way the story is told, the portrayal of the characters, the tone, the subject matter… all this is very original, and that is why the translation work was enjoyable. Indeed, it is always a pleasure to translate a well-written, intelligent and entertaining text. One notices in this book a truly exceptional mastery of expressive means, considering that it is a narrative debut.

Did you encounter any particular difficulties in the translation?

The main difficulty was to render the fluidity of the style. So the proofreading work was particularly important. Bacà tells us a story that resembles a philosophical fable, and it was essential that the French writing should bend to the needs of the narrative, with as much clarity as possible, so that everything flowed smoothly, that everything unfolded as ‘naturally’ as possible. I reread many things aloud until I heard the language flow.

Otherwise, the novel is very well written, so I did not encounter the problems one sometimes has with books with unclear language. In fact, it goes without saying that the better the writing, the easier the translation: the words are in the right place, the concepts are clear, the structure is solid, the rhythm harmonious. Otherwise, you translate a first sentence, a second, a third, and find that, even if the translation is right, the whole thing does not work: something is always missing, because the editing has not been done in the source language.

This is one of the pitfalls we increasingly come up against, and not only in the case of Italian literature, but in general. The pace of production and budget restrictions (in terms of editing and fabrication) are partly responsible for this sort of disinterest in form, a backwardness compared to the past. But not only that: a number of literary critics focus on the plot, neglecting to talk about style, structure, rhythm, everything that constitutes the writer’s skill, or devoting only a few lines to it.

In a good book, substance and form must be balanced, in equal parts, without one prevailing over the other, or rather, so that one builds on the other. The language must be at the service of the story, but with such mastery that it can be forgotten in the course of reading, otherwise the story cannot hold up. Due to the tendency to privilege content over form, the latter is increasingly neglected in the country of origin and it is often up to the translators to remedy this in the target language. In fact, publishers often ask us to intervene to ‘improve’ the style, which was quite rare when I started working in this field in the early 1990s.

What do you think are the strengths of this book?

The writing, which the reader does not necessarily notice because it is so skillful; the dialogue that is striking; the structure that gradually reveals the psychology of the characters; the sparkling tone; the bizarre situations; the different reading levels; the elegance. The whole thing exudes a lot of energy, I would even say joy. Yes, this is a truly exultant book.

It is worth mentioning that the absurd plays an important role in the book (the swimming pool scene, for example, comes to mind). Kurt, the protagonist, works in the field of statistics. Statistics, like the clichés they convey, have a reassuring side, because they offer a framework, within the limits of which we imagine we can predict everything, control everything. This is of course an illusion, which Kurt experiences in the course of the novel, moving from one absurd situation to another, accompanied by the reader. The main idea of the book is that there is a ‘cosmic benevolence’ whose laws escape us. It is therefore futile to try to dominate life: life will always surprise us, and all the more so when we abandon ourselves to it. At least that is how I understood it.

But this is not a book with a thesis, with a message, everything is very well thought out, situations occur naturally and we are easily involved. Since there are different reading levels, one can be content with the plot, with its many twists and turns, and thus spend a pleasant time, glued to the page; but one can also take advantage of the philosophical slant, which invites one to reflect. These two possible entries are proof that the book is a success. In fact, every time I reread the text, I discovered new details, new aspects. For this reason, I never felt tired of my work.

How did you get the idea to translate the title Une chance insolente?

Frankly, I liked the original title, “Cosmic Benevolence”, which I had literally translated as Bienveillance cosmique. But the publisher probably thought it was too mysterious, or not explicit enough. However, the expression is found in the body of the text and is important because it emphasises the idea that we live in a universe whose harmonious and benevolent laws elude reason and statistics. 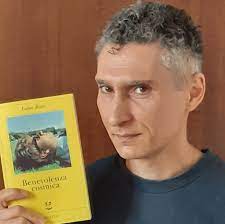