The website is under construction. We apologize for any inconvenience.
Home / Books/ Non-fiction/ Noi, bambine ad Auschwitz (We, little girls in Auschwitz)
BooksNon-fiction 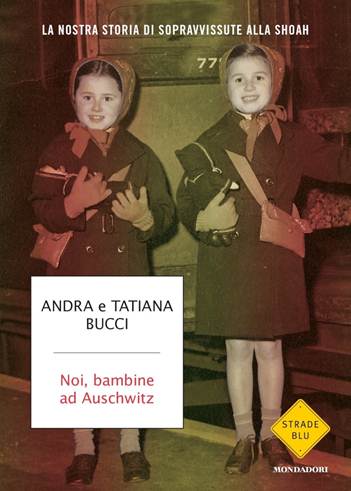 Tatiana and Andra (short for Alessandra) Bucci were six and four years old when they were arrested in the city of Rijeka (then part of Italy) on March 28, 1944, along with their mother, their grandmother, their aunt, and their cousin Sergio (who was sevn at the time). They were held at a concentration camp for a night and then deported from Trieste to Auschwitz the next morning. When they arrived at the Judendrampe on April 4, they were selected and sent to Birkenau, where they were matriculated with the numbers 76483 (Andra) and 76484 (Tatiana). They were assigned to the Kinderblock. The girls survived, unlike their cousin Sergio; they remained in the same camp until the arrival of the Red Army on January 27, 1945. After the liberation, Tatiana and Andra were regarded as orphans (their mother was previously transferred to another camp inside the Reich); they were sent to Prague and, later on, to the Lingfield house in the United Kingdom, which operated as home for child survivors of the Holocaust. It wans’t until August 1946 they finally managed to reunite with their parents.

Tatiana and Andra Bucci were born in Rijeka (then part of Italy) from a Jewish mother. They did not begin to talk about their experience until a short interview in the late 70’s. Nowadays, Tatiana lives in Brussels while Andra lives in the US. They are now prolific speakers on the Holocaust, telling their story for future generations to learn from.