The website is under construction. We apologize for any inconvenience.
Home / Books/ Non-fiction/ RAPHAEL’S LOGGIAS
BooksNon-fiction 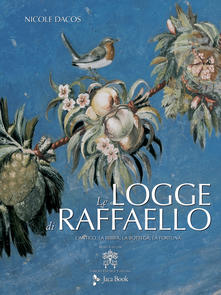 An absolute masterpiece of Renaissance art presented by the world’s leading expert of the Vatican Loggias. A great photographic and iconographic campaign

An absolute masterpiece of Renaissance art presented by the world’s leading expert of the Vatican Loggias. A great photographic and iconographic campaign.

Raphael’s workshop was the most remarkable and complex artistic firm of the entire sixteenth century and the Loggias of the Apostolic Palace in the Vatican represent one of the highest outcomes of the artist’s genius, as well as the most fortunate. The echo that the Loggias were able to create was immense, in Rome and in the world, from the Renaissance to the twentieth century, through two very different artistic movements but with equally important developments.

The so-called ’grotesque’ became the highly imitated paradigm of the homage to the Ancient: Raphael reinvented the decorations found in the ’Caves’ of the Domus Aurea creating a new aesthetic model that would have spread in the Italian and European villas, right up to the exact replica of the Hermitage in St. Petersburg.

The second movement comes from the ceiling of the Loggias, made up of 15 small vaults, in which scenes from the Bible are masterfully illustrated, destined to become models of the representations offered to the the illiterate people (Bible Pauperum).  Exquisite decorations and refined tributes to ancient art dialogue with the frescoes of the biblical scenes; extraordinary works of invention and expressiveness with a didactic and popular purpose.

NICOLE DACOS (Brussels 1938-Rome 2014) Famous art historian, she studied in Rome with Ranuccio Bianchi Bandinelli, then at the school of Roberto Longhi with Federico Zeri, Giuliano Briganti and Giovanni Previtali. She taught at the University of Brussels and London, at the Warburg Institute, and was recognized as a ’senior guest’ at the J. Paul Getty Museum in Malibu and at the Center for the Advanced Study in Visual Arts in Washington