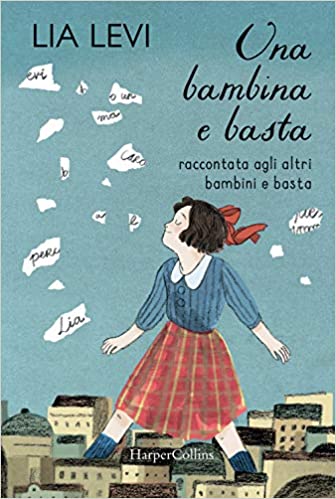 Just a Girl by Lia Levi, is the retelling for kids of the classic title written by the author in 1994 and is the tender and moving story of a girl growing up under the racial laws.

“The war came into our home and I will tell you how”. An intense and delicate autobiographical story of a Jewish family during WWII, narrated through the eyes of a seven-years-old girl. From Turin to Rome, Lia and her family try many attempts to avoid the Nazi deportation, until the day she along with her mother and her sister are hosted by nuns in a catholic convent. There, Lia’s religious identity starts to be uncertain and she does not know anymore whether be Jewish or not, for this reason the relationship with her mother hardens. Though, once the war is over, her mother makes her discover an important truth – Lia is not a Jewish girl, she is just a girl.

A significant and authentic classic story that every child should have on the shelf, enriched by original four-colored pictures by awarded Polish illustrator Zosia Dzierżawska.

Lia Levi is one of the most relevant Italian writers, beloved by adults as well as children, winner in 2018 of Premio Strega Young Readers.

Lia Levi’s works convey to readers a strong sense of confidence in the possibility of transmitting historical memory to future generations.

LIA LEVI was born in Pisa in 1931, to a Jewish family  of Piedmontese origins.  Lia Levi is best known as the author of several works of fiction largely dedicated to Jewish themes. In her long career, she has published many books for children with Mondadori and Piemme.

ZOSIA DZIERŻAWSKA is an illustrator & comic author from Warsaw, Poland, and a co-founder of Studio Armad’illo, an illustration and graphic design studio based in Milan. She works for a variety of international publishers, her works have been awarded twice at the Bologna Children’s Book Fair Illustrators Exhibition, as well as at the Society of Illustrators in New York.