1996. Neri is a young boy of 13 when his mother suddenly dies and his father decides that the family must leave Florence and move to Holzbrücke, a small village on the outskirts of the Black Forest. Their new neighborhood soon proves to be an inhospitable and somewhat unsettling place, as if there is something lurking in the shadows and behind people’s reluctance to be welcoming towards newcomers. It doesn’t take long for Neri to discover what is really happening around him: every year, on the 11th of November, the dead returns from the afterlife, and the families of the neighborhood are visited by the ghosts of their loved ones. On top of that, what’s really disturbing is that the dead have no conscience of being so, and the living make their best to keep up this appearance. Everyone has their secrets, whether it’s a young boy who’s still processing his mother’s death; a tomboy whose parents’ marriage may not be as idyllic as it seems; two thieves on the hunt for a buried treasure; a widow who’s patiently waiting for her husband’s return; and an old, bad-tempered woman who can possibly be the only one to really know what is going on. And why.

Born in Sansepolcro, Tuscany, in 1984, Tarek Komin is an author of Syrian origin. After studying piano at the Perugia Conservatory, he graduated in historical-anthropological studies at the University of Siena. He wrote several novels and poetry collections. 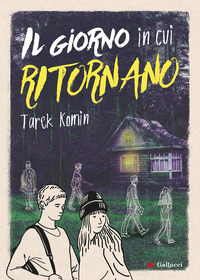