“I’ve had three mothers and I can\’t remember any of them.\’

Macondo is a fifteen-year-old with a high IQ, a voracious appetite for Sherlock Holmes and Martin Mystère, and a secret passion for his friend Bea. He wants to discover what is really in his past. It\’s too massive a void to ignore, and yet his beloved grandmother, the famous Chilean painter Rocio Sanchez who raised him, doesn’t allow him to know the truth until he turns 18. And in the meantime, she keeps the secret of his childhood in a mysterious box on the top shelf in her study. Macondo is impatient, though, and is determined to carry out his own investigation to shed light on his teenage present and learn how to cope with it. He collects clues and anecdotes from Rocio\’s colorful tribe of bohemian friends, who gather at their home as one large family, and from the notes that his grandmother writes to him, tearing them from a notepad that she brings around as a necklace – in the way she communicates with the world, after having lost her voice due to a throat cancer. She gives him glimpses into her past, her family in Chile, and the time when she lived with her daughter and her two best friends, when Macondo was born and named after Gabriel Garcia Marquez’s novel. In his quest, Macondo needs to find an identity, and ends up discovering what a family really is: an ever-changing organism that emerges in situations where blood doesn’t come into play.

\’Written in dynamic, intimate clipped prose L’istante largo takes the reader into a buoyant youthful world where insights and discovery work the kind of brilliance we haven\’t witnessed in today\’s prose. Fruner is a magician of the word.\’ – André Aciman

\’I finished reading L\’istante largo with a feeling of deep tenderness, it is a novel filled with all the colours of human experience. I felt them blended in between the pages, I smelled them. I know those colours very well, because they also belong to my world – painting was my first passion. And so, this novel joined my experiences. Colours are never just colours, the Pantone codes convey on the pages of this story, as well as on the canvas, the immense variety of human feelings, and give life even to the most intense and unexpected nuances of the less conventional forms of love.\’ – Ilaria Tuti

Sara Fruner was born in Riva del Garda, Italy. In 2017 she moved to New York City, where she teaches Italian at New York University. Her articles have been published in La Voce  di New York, CinematoGraphie, Magazzino 23 and Brick. She contributes as a translator and performer to the Magazzino Italian Art Foundation and the Center for Italian Modern Art. She is a professional member of the Authors Guild and of PEN America. 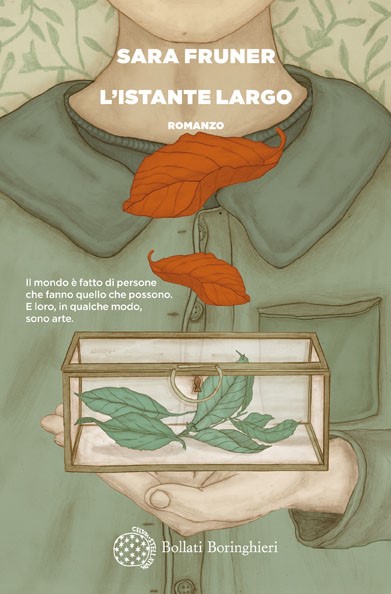